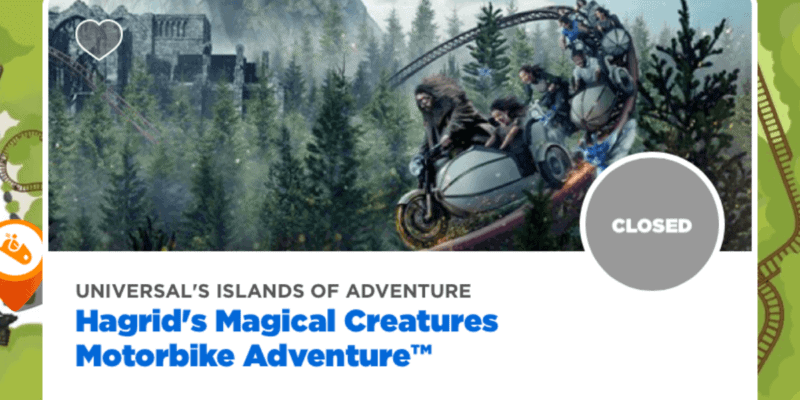 On Tuesday, an event described as a backstage fire struck Hagrid’s Magical Creatures Motorbike Adventure, causing the Wizarding World of Harry Potter’s latest and most popular attraction to close.

According to the Universal Orlando Resort app, Hagrid’s Motorbike roller coaster is still closed at Universal’s Islands of Adventure and there is no word yet on when the attraction will be back up and running.

When Hagrid’s Motorbike opened with the rest of Islands of Adventure, Universal Studios Florida, and the rest of Universal Orlando Resort, it was the only attraction accessible only via the new virtual line system due to its immense pre-pandemic popularity.

The news of the extended closure comes a week after Universal announced that A Day in the Park with Barney, Fast & Furious: Supercharged, Kang & Kudos’ Twirl ‘n’ Hurl, and Fear Factor Live at Universal Studios Florida, and Storm Force Accelatron at Islands of Adventure would be temporarily closed.

Universal Orlando describes its latest attraction on its website as the following:

Join Hagrid and Fly into the Forbidden Forest. An epic new addition has arrived to The Wizarding World of Harry Potter™. For the first time ever, fly deep into the wilds of the Forbidden Forest, beyond the grounds of Hogwarts™ castle. As you twist past towering trees, magical creatures and wondrous surprises surround you. One misstep could drop you into an endless pit of Devil’s Snare, or put you in the sights of a centaur’s bow. Anything can happen here.

When you are planning a trip to Universal Orlando Resort, there is a lot more important information to keep in mind than which attractions are operating, and that is why we continue to recommend our friends at Academy Travel. Backed with years of experience, Academy’s Agents know what it takes to keep you informed and help you make your Universal Vacation as awesome as possible. Click here to learn more and to receive your free, no-obligation quote today!

When do you hope Hagrid’s Magical Creatures Motorbike Adventure will be back up and running? Do you have a visit coming up? Let us know in the comments!