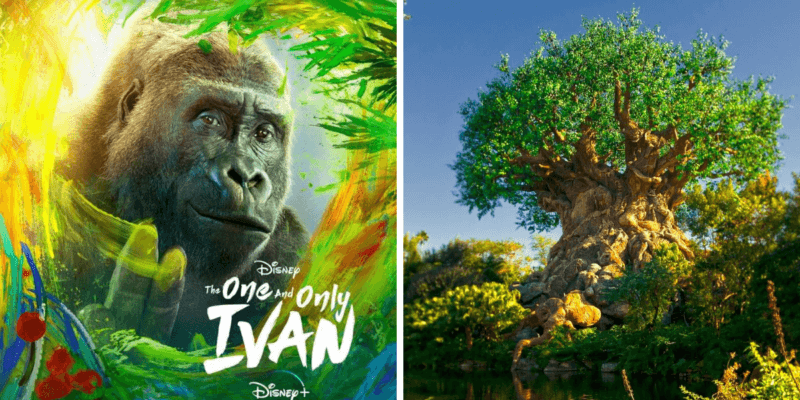 The One and Only Ivan premieres on Disney+ today, August 21, telling the story of a 400-pound silverback gorilla that gets moved to a sanctuary after living 27 years in a suburban shopping center. Based on the award-winning novel by Katherine Applegate, the story’s message of friendship and animal care, the film is a continuation of Disney’s decades-long commitment to conservation and animal care.

The Walt Disney Company highlighted the continuity in a press release, stating:

The positive message found in The One and Only Ivan is very much in keeping with The Walt Disney Company’s ongoing commitment to animal care and conservation. At Walt Disney World Resort in Florida, Disney’s Animal Kingdom, Disney’s Animal Kingdom Lodge and The Seas with Nemo & Friends have all been accredited by AZA. Around the world, since 1995, the Disney Conservation Fund has directed $100 million to support nonprofit organizations working with communities to save wildlife, inspire action and protect the planet, with more than $10 million directed to support primate conservation efforts across nearly 35 countries, including grants to support all four sub-species of gorilla like those to the Dian Fossey Gorilla Fund International (Fossey Fund)and GRACE (Gorilla Rehabilitation and Conservation Education) Center.

The Fossey Fund has been a recipient of Disney support for more than two decades.  As the world’s longest running and largest organization fully dedicated to gorilla conservation, the Fossey Fund works to save both mountain gorillas in Rwanda and Grauer’s gorillas in the Democratic Republic of the Congo. Their people-centered approach includes daily protection of individual gorillas and their families, scientific research, training the next generation of African conservationists and improving the lives of people who share the gorillas’ forest home. Also working in the Democratic Republic of the Congo, GRACE is now home to 14 Eastern gorillas, each rescued from poachers and brought to GRACE to live together in a large forest enclosure with the hopes of reintroducing them back to the wild one day. In addition, the program works to advance community conservation in the region with programs that include economic empowerment opportunities for women and conservation clubs that get kids involved in helping gorillas and each other.

Disney’s history of conservation and animal care also played a role in the real-life story of Ivan. Dr. Terry Maple, former president and CEO of Zoo Atlanta–the man who got Ivan out of the shopping center into the gorilla habitat at Zoo Atlanta–is on the advisory board that was started before the opening of Disney’s Animal Kingdom Theme Park in Orlando, Florida. Disney’s Animal Kingdom also served as a major resource for The One and Only Ivan‘s filmmakers.

Related: It’s Official: ‘Once Upon a Time’ is Coming to Disney+