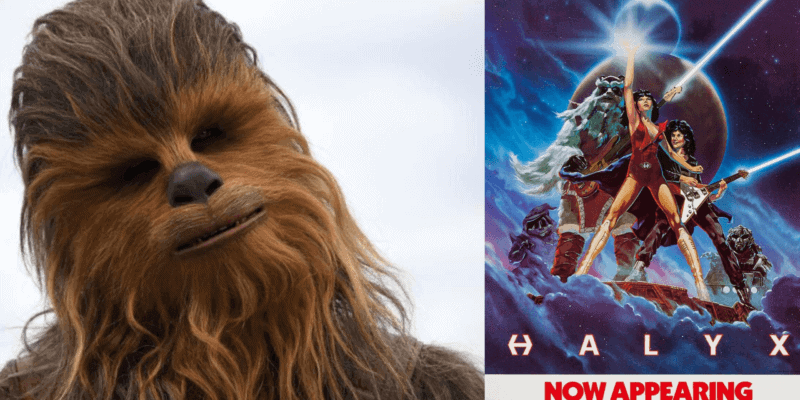 While there may be some of our readers that remember the early 80s at Disneyland, there will be many that won’t and even fewer that remember the band Halyx. The band was essentially Star Wars meets Rock and Roll and is one of the most incredible and bizarre creations we have ever seen at any Disney theme park.

Related: What order should you be watching the Star Wars movies in?

The band played on the Tomorrowland Space Stage in the Summer of 1981 and included a 7-foot tall Wookie inspired character, a Stormtrooper inspired keyboard player, and an acrobatic alien amphibian on the bongos. Yes, this really did happen, we know how strange it all sounds!

What’s crazy is that all of this happened way before the relationship between Star Wars and Disney had really gotten underway, Star Tours was still years away at Disneyland (opening in 1987) so it was really something to see a Star Wars-inspired show appear at the park in 1981.

So why did Disney create a Star Wars band in the early 80s? Well, the team at Disneyland Records wanted to expand beyond just releasing children’s records and soundtracks to movies so pondered the idea of creating a rock band. Star Wars had created a huge science fiction craze that hadn’t really been seen from a mass audience since the 50s so the concept of an intergalactic rock band was thought up. Tomorrowland seemed like the best place for the band to test a crowd reaction ahead of recording a full album.

While the name Halyx was eventually decided on, the team first considered the likes of Strike, SQWAD, and Starfire.

The band had a mixture of human and costumed alien performers and despite the incredible concept, the band only survived the summer at Disneyland as management at the time was a bit concerned about having loud rock music in the park.

Thankfully Disney eventually learned the lesson that rock music was perfectly tolerable in the parks with the likes of the Eat to the Beat Concert Series at EPCOT being just one example where it’s now perfectly acceptable to have rock music in a Disney theme park!

Sadly the record deal also fell through, with Disneyland Records and Warner Music Group failing to reach an agreement.

We thought all would be lost for the band until Defunctland came along to produce a  fantastic 90-minute documentary that tells how this band was first formed and interviews original band members. You can actually watch the entire video in full below:

We’ve watched the entire documentary and it is incredible to see the old band members come together to retell the story of how they were formed and what happened to them in more detail.

If you’re thinking about booking a trip to Disneyland when it reopens then get in contact with our friends over at Academy Travel. No matter what your Disney Parks needs. the team will be able to help you to book your next magical vacation. Contact their team now for a free quote!

What do you think of this Star Wars-inspired 80s throwback? Let us know in the comments below!