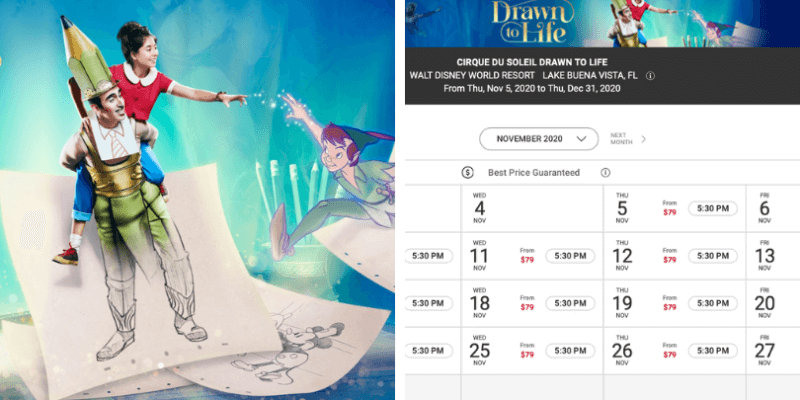 According to the Disney World website, tickets are now on sale for Drawn to Life, so the Cirque Du Soleil show at Disney Springs seems to be set to debut this November.

It’s been months since major closures happened worldwide.  One of the largest hits was to the entertainment industry especially theaters and live entertainment.  And with the stop in all performances for the last four months, it really made an influence on Cirque Du Soleil, one of the most popular live entertainment shows worldwide.  In March, they had shut down and laid off 95% of the entire company impacted their show Drawn to Life that was originally set to open in April.

With the length of time the company has been shut down, it was announced yesterday that Cirque Du Soleil would be filing for bankruptcy.  Would this affect Drawn to Life from actually coming to life at Disney Springs?  Well, it doesn’t seem like it because Disney Springs has been open for well over a month now, and as each phase goes by, more and more of Walt Disney World Resort is reopening.  Tickets for the show are available for November on their website, and Walt Disney World’s website still shows a message saying Drawn to Life is coming soon!

So what is the Drawn to Life show about?  Cirque Du Soleil is known for amazing acrobatic mastery in all their show.  Disney is known for imagination and animation.  When you put the two together, you will get a lively, creative production showcasing the mixture of Disney storytelling with beautiful, and maybe even daring, stunts.

As mentioned before, tickets for the show are showing availability on Cirque Du Soleil’s website starting November 5th, this fall.  Tickets start at $79 and are selling until the end of the year.  Shows run from Tuesday-Saturday of every week with performances starting at 5:30 p.m. each of those days.  With such an interesting concept and a company to really bring it to life, no pun intended, it should be a very favorable act.

Book your trip to Disney World with Academy Travel to see Drawn to Life in person!