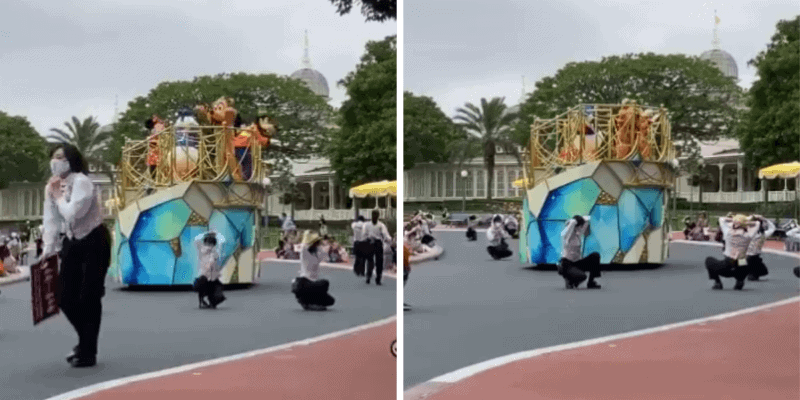 An earthquake alarm went off on mobile devices in Tokyo today just after 10 a.m. local time. Although it was reported that no major shaking was felt — and soon after it was reported that the warning was a mistake — Cast Members and Disney characters alike told Tokyo Disney Resort theme park Guests to take cover.

Note that at this time, all Guests and Cast Members are safe, as the earthquake did not detrimentally affect Tokyo Disneyland or Tokyo DisneySea.

Below you can see a video of Tokyo Disney Resort Cast Members advising Guests to take cover after hearing the earthquake warning.

Earthquake alarm went off on mobile devices in Tokyo. No major shaking felt – but here are characters at TDR telling guests to take cover: https://t.co/HNmXdPlzva

Guests promptly followed instructions and crouched on the ground until they were told otherwise.

“#TDR_now
The spill will play in the Earthquake Early Warning!
I crouched and waited until I received an instruction”

Soon after, an announcement played over the theme park loudspeakers telling Guests and Cast Members that the earthquake warning was apparently a mistake.

Reporter Scott Gustin took to Twitter to share that there was an earthquake in Japan, but it was not anywhere near Tokyo or Tokyo Disney Resort.

There was a 5.8 quake – but not near Tokyo. pic.twitter.com/uETSxpNKyG

“The Earthquake Early Warning was scary… I’m glad it was a false alarm. I was worried because no one was around because it was vacant #TDR_now”

“I understood how Disney responded when the earthquake early warning sounded, but I don’t know the nerves of taking a picture of it with my smartphone. This time there wasn’t a big shake, so it’s good, but isn’t it that you can’t protect your head when shooting? I’m telling you to protect. So if the customer had something to do, Disney might be criticized.
#TDR_now”

One reported that attractions had stopped.

It’s clear from these reports on social media that Disney did what they could to assist Guests after the earthquake warning was played. The theme park also promptly shared when the warning was a false alarm. It looks like all Guests and Cast Members were able to continue their day as normal following the false alarm.

Tokyo Disney Resort‘s two theme parks have been open for a few weeks. Both Tokyo Disneyland and Tokyo DisneySea reopened on Wednesday, July 1. The parks have introduced several new health and safety measures for the well-being of all Guests and Cast Members as the pandemic continues to spread worldwide. You can click here to read more about the new safety protocol at Tokyo Disney Resort.