Exclusive 'Star Wars' Funko to Be Released on Amazon! - Inside the Magic 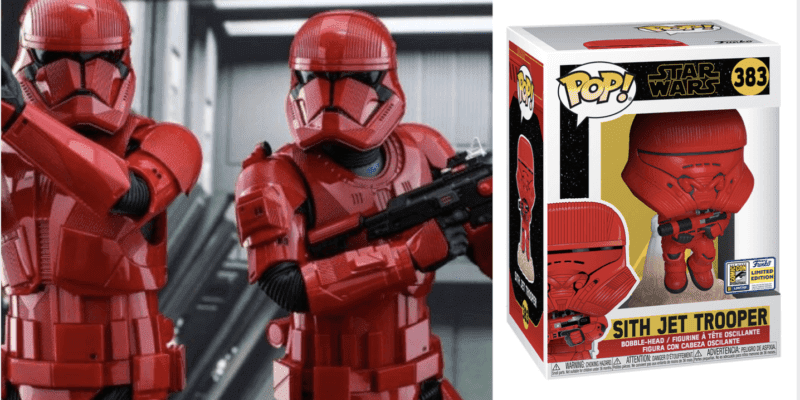 After the cancellation of the 2020 San Diego Comic-Con event, Funko POP! collectors started wondering what would happen with the popular comic convention’s much-sought-after exclusive Funkos.

Funko and the StarWars.com team have confirmed that at least one 2020 SDCC exclusive POP will be available online. Funko Pop #383, a bobble-head Sith Jet Trooper, is slated to hit Amazon.com and Funko.com in late July for $15.00.

The StarWars.com article about the upcoming Sith Trooper Funko release featured this description of the Star Wars collectible:

Fans of Star Wars know the background of Sith Troopers, who are sometimes referred to as red storm troopers. These elite soldiers were based on Exegol, an army raised by Sith cultists who were devoted to Emperor Palpatine.

Each trooper’s red armor was inspired by the dark side’s lightsaber blades and was intended to invoke fear into anyone with whom they crossed paths.

The SDCC Sith Jet Trooper Funko Pop is not yet available for pre-order, but continue checking both Amazon and the official Funko website if you want to buy this Comic-Con exclusive vinyl figure.

The previous limited release edition Sith Trooper Funko POP! that was exclusive to San Diego Comic-Con is one of the more expensive Funko products on the resale market today, with some new-in-box Pops selling for upwards of $1,000!

Are you excited about the release of the SDCC exclusive Sith Trooper Funko even though this year’s convention was cancelled?

Comments Off on Exclusive ‘Star Wars’ Funko to Be Released on Amazon!