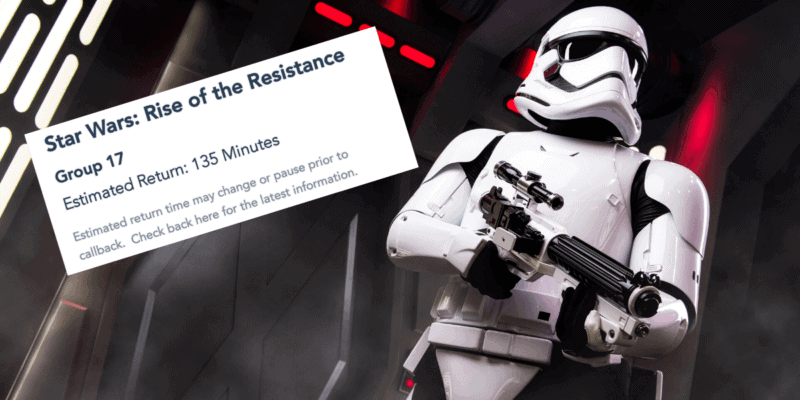 New developments have emerged regarding the Disney World’s modified virtual queue for the Star Wars: Rise of the Resistance attraction. Now, when Guests join a boarding group, they are given an estimated return time as well.

This news has been shared by Guests on Twitter who are in Disney’s Hollywood Studios experiencing the change for themselves.

Group 17 for Rise of the Resistance today! Unlike yesterday, it now shows an estimated return time! #HollywoodStudios pic.twitter.com/2JxKyNoT4V

Previously, all Guests were given was a boarding group number. While they were able to then go about their day, there was no estimated time given. Guests then had to constantly check the My Disney Experience App to see the status of the line and judge for themselves when they would need to return to the attraction entrance.

This is the latest development regarding Rise of the Resistance’s modified virtual queue. Recently, we at Inside the Magic shared the news that Guests will now have three opportunities throughout the day to secure a place in the queue and join the Resistance.

For guests with upcoming Disney Park Pass reservations to visit Disney’s Hollywood Studios, we wanted to share an update about Star Wars: Rise of the Resistance, which will once again be using virtual queue in the My Disney Experience app. If you’ve joined the Resistance before, you will want to note a few changes to the process beginning July 15. Most importantly – as availability allows – guests will have an opportunity at 10 a.m., 1 p.m. or 4 p.m. to request to join the virtual queue. This means there is no need to arrive early to the park to check the virtual queue.

When Disney’s Hollywood Studios reopened to the public yesterday, July 15, Guests reported issues with the new virtual queue system. While Cast Members were on hand to help Guests through the issues, this caused crowds to form at the entrance to the Star Wars: Galaxy Edge attraction, raising concerns about Disney being able to maintain social distancing in spontaneous circumstances such as this.

We want to remind our readers if you are heading to Disney’s Hollywood Studios and want to experience Star Wars: Rise of the Resistance, make sure to have the My Disney Experience app downloaded and open. Once you are inside the theme park, select “Star Wars: Rise of the Resistance Virtual Queue” on the home screen and you will then be walked through the steps needed to join a boarding group. It will also tell you if there is no availability. Please also make sure your tickets or passes are linked to your My Disney Experience account and you are signed in.

Have you had a chance to experience Star Wars: Rise of the Resistance yet? What would you recommend to someone attempting to join the virtual queue for the first time? Let us know in the comments!

Book a trip to the Disney Parks with the Authorized Disney Vacation Planners at Academy Travel!