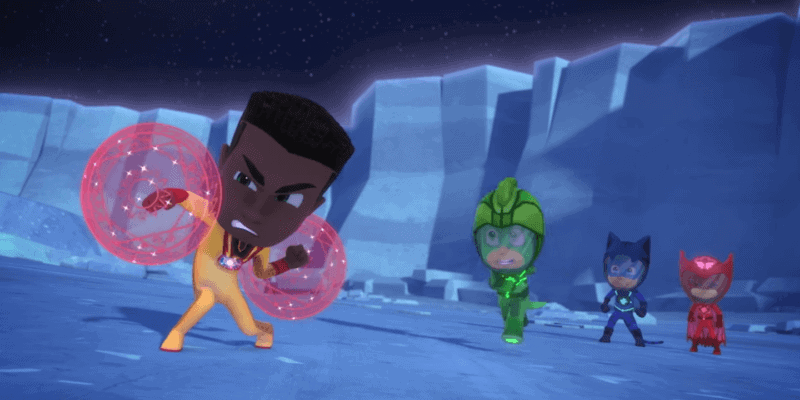 PJ Masks is a popular Disney Junior series that follows a group of superhero kids who fight evil throughout the night. PJ Masks follows 3 favorite heroes — Connor, Amaya and Greg — as they put on their pajamas and transform into their alter egos — Catboy, Owlette and Gekko.

In case you aren’t familiar with the animated series, the description reads:

Kids like superheroes, so what could be better for tykes than becoming superheroes themselves? That’s what happens at night for young friends Connor, Amaya and Greg. When they put on their pajamas and activate their animal amulets, they turn into their alter egos — Catboy, Owlette and Gekko — before embarking on adventures that are filled with action. Along the way, they solve mysteries and learn valuable lessons. The animated series is based on the `Les Pyjamasques’ book series by French author Romuald Racioppo.

But now, in the upcoming season, Disney is adding four brand new characters to the PJ Masks team. Some of the new characters are bringing diversity to the show.

According to PopSugar, the first of four new characters is Newton Star, who will make his debut in the August. 3 episode.  In the episode titled Asteroid Accident / All About Asteroids, Owlette  (aka Amaya) “causes an asteroid accident that Gekko and Catboy then attempt to help her fix, but as it turns out, Newton is a new nighttime hero and scientist who’s emerged from the outer space incident.”

Newton’s first two episodes will air on Disney Junior on August 3 and August 17. Once the audience is introduced to Newton Star, the Disney Junior animated show will then introduce three more new characters to the PJ Masks team. These include Munki-Gu, Octobella, and Pharaoh Boy.

If you are looking to catch up on Disney Junior’s popular children’s series, PJ Masks, you can stream the prior seasons now on Disney+. If you aren’t yet signed up for the streaming service, you can get started here.

Are you excited to see Disney add more diverse characters to PJ Masks? Let us know in the comments below.