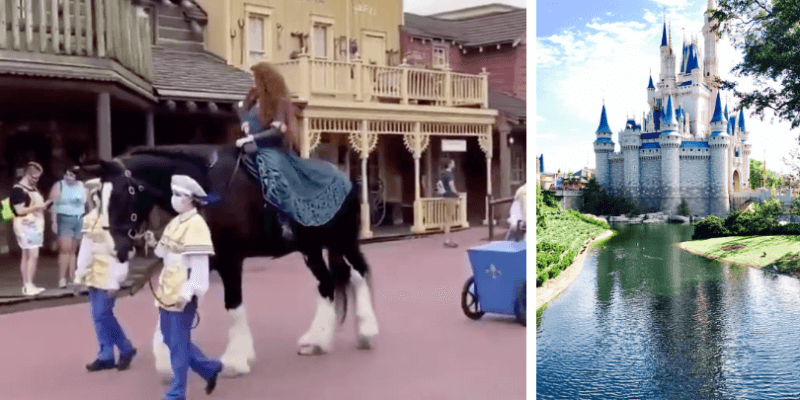 “Our fate lives in us. You only have to be brave enough to see it.” The Scottish Princess’ wisdom comes to us in a surprise Merida appearance for Cast Member Previews today at Magic Kingdom. Twitter user christier0408 shares with us video of Merida atop “Angus” riding through Frontierland with attendants. It’s been very exciting to see how Disney will present characters since the traditional meet and greet will not be possible at this time. Besides barges and Castle shows, horseriding with attendants seems to be a very cool way to present our favorite Disney heroes and heroines. (We wouldn’t mind a villain thrown in there, either!)

Those of us not able to travel to Walt Disney World or Magic Kingdom this week were treated to a surprise while visiting the parade route in Magic Kingdom. Princess Merida, coronated in front of Cinderella Castle in 2013, evokes freedom and taking hold of your own fate. Her regal stature was brought to us by twitter user @christier0408. Instead of a meet and greet at Fairytale Gardens, guests will be able to can see her both coming towards us and headed towards Liberty Square as the cleanup attendant trails behind.

There were other surprise character sightings as Walt Disney World came alive for the Cast Member previews this week.  Official testing went on a few days ago as Mickey and Pluto sailed around in barges. We’ve also seen some really fun things happening at Disney’s Animal Kingdom and Magic Kingdom as Cast Member previews are currently running and Annual Passholders will be allowed to visit very shortly. Official openings for all guests with reservations start on Thursday, July 9th, 2020.

Which Disney Character do you most want to see at Magic Kingdom? Leave us a comment below!