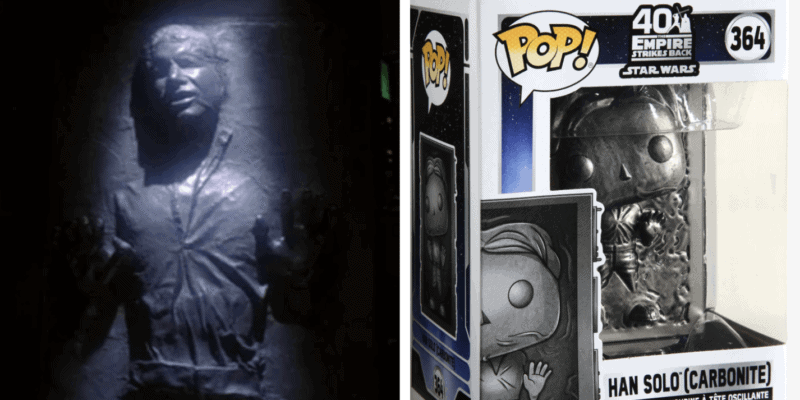 If you’re a fan of Han Solo, this is probably not your favorite line in the Skywalker Saga.

The unfortunate series of events that results in Solo becoming encased in carbonite at the hands of Jabba the Hutt is, however, one of the most well-known storylines in any Star Wars film. Due to this, there’s plenty of merchandise featuring Han in carbonite, especially this year as Star Wars fans celebrate the 40th anniversary of Empire Strikes Back.

Hot Topic has gotten in on the “40 Years of ESB” action with this Han Solo in carbonite Funko POP!

40 years it has been! Celebrate the Force, we must. Han Solo is frozen in carbonite from Star Wars: The Empire Strikes Back. He’s been given a Funko Pop! makeover as a vinyl bobble-head.

The back view of the Star Wars carbonite Funko Pop gives collectors a good view of the side panel, which looks incredibly realistic. You can almost imagine you’re freeing Han from Jabba’s palace yourself.

We also love the collectible 40th Anniversary of Empire Strikes Back Funko POP! box, which features the official “40 Years” logo alongside the Star Wars logo.

Whether you’re a Funko POP collector or not, this piece of Star Wars merchandise is a must-have for any fan of the original Star Wars trilogy. The Han in carbonite Funko would look great on a shelf by itself or with a Star Wars memorabilia collection!

You can purchase the Han Solo Carbonite Funko Pop figure here for $12.50. For a limited time, the coupon code “HT20” will give you 20% off your purchase, making the Star Wars Funko just $10.00.

Comments Off on Han Solo in Carbonite Funko POP! on Sale Now!