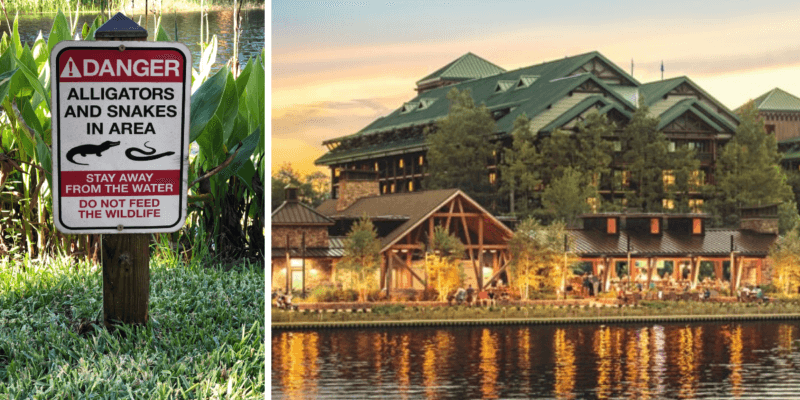 Florida is a state rich in its diversity of wildlife. It has everything from black bears and panthers to bald eagles and Burmese pythons. Of course, most notably among the fauna is the Florida alligator.

Growing up in the Sunshine State, I’m quite accustomed to having gators, water moccasins, and other such creatures lurking in the bush on the fringe of lakes or streams. And if you can’t see them, that doesn’t mean they are not there.

But for some who are now enjoying an extended stay on Walt Disney World property with the NBA, the idea of being surrounded by “dangerous” wildlife is a new experience.

NBA writer Shaun Powell is one such person getting used to this new way of life.

“They stand along the lakeshore using symbols and bold-face lettering and also the color of code red to issue a stern warning,” he writes. “‘Danger.’ And: ‘Alligators And Snakes In Area.’ And there’s this bit of advice as well: ‘Do Not Feed The Wildlife.'”

He continues, “The signs are socially distanced about 10 feet apart and run along Lago Dorado, the body of freshwater that serves as the blue centerpiece for the Coronado Springs Resort, the hotel for NBA personnel and media and a few teams. There’s a walking path near the signs, which allows you to (a) enjoy the glistening of the calm water and (b) stray within lunging distance of a gator should the beast feel the urge to venture from the lake and feast.”

Now, Powell admits he hasn’t seen any alligators or snakes at WDW as of yet, but he’s not ruling out that chance. See, Walt and Roy Disney built the Walt Disney World Resort on a swamp almost in the complete center of the Sunshine State. And Powell brings to light a side of the mega-resort that is not known by a lot of people.

Walt “was a developer but also an environmentalist; yes, the two can coexist.” Not only is there native life all around the property, but less than half of the land the Walt Disney Company owns is developed. And many of the animals that were displaced by construction were moved to the untouched areas.

But Powell is not afraid. In fact, he’s excited to see something. “Actually, I’m eager to see danger, from a distance, of course,” he admitted.

This Floridian is proud of him.

For those reading this suddenly struck with the fear of running into an alligator while you walk the man-made beaches of the Seven Seas Lagoon, you needn’t worry. They want to avoid you as much as possible, too.

The NBA kicks off the remainder of its season at Disney World’s ESPN Wide World of Sports Complex on July 30.

Have you seen any outstanding wildlife on Walt Disney World property? Tell us about it in the comments!