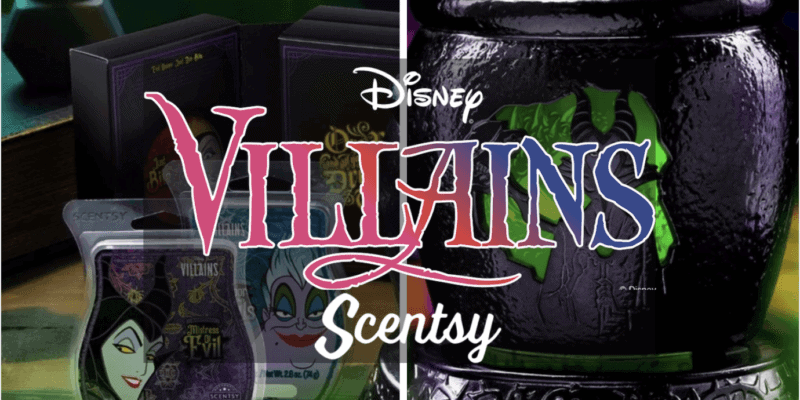 Due to manufacturing and shipping delays, the Scentsy Villain Warmer was delayed from the original release date of October 1, 2020. But today, we bring you some wickedly good news! The release date has been revised (again!) and this new Disney Collection is available now, just in time for Halloween. Make sure to get your order in before this warmer vanishes and you become one of the poor unfortunate souls who miss out! Place your order for the Villain warmer and wax Collection here or reach out to your independent consultant today.

Scentsy has become a household name since it launched in 2003. Scentsy independent consultants sell a variety of wax warmer and wax melt products designed to give your home the perfect fragrance for any occasion.

The brand regularly partners with well-known companies like Disney to release special Scentsy collections. The latest Disney Scentsy series is for everyone who loves the darker side of fairy tales.

On October 26th (see update below), Disney Villain fans will be able to get their hands on a Villians-centric Scentsy series that features a wax warmer and three new scents, all inspired by iconic Disney Villain characters.

The Disney Villains Scentsy warmer is is 6″ tall and is described as the following:

The Evil Queen, Maleficent and Ursula the Sea Witch are etched in fine detail onto a cauldron perched atop a bed of twisted thorns. Images on the interior sleeve reveal more of each character’s story, and the included green light bulb adds an eerie effect. Just beware the poison apple in the dish!

The warmer will be priced at $75 and can be purchased from your Scentsy consultant or you can shop online here.

The Disney Villains wax melts themselves feature these official descriptions:

Evil Queen: Just One Bite — The temptation is too much to resist when poisoned apple hidden deep in forest woods blends with warm cinnamon and menacing black molasses.

Maleficent: Mistress of Evil — The beauty of gardenia meets malevolent musk, while juicy blood orange drips over satsuma plum for the sweetest revenge.

Each of these Villain scents sounds perfect for the fall season, especially Halloween.

It is important to note that the Disney Villain wax scent trio will only be sold as a set with a commemorative box for $20 unless you are a Scentsy Club member. Then, as seen below, individual Disney Scentsy melts will be available for $6.50.

On September 10th Scentsy informed their Scentsy Consultant team that manufacturing and shipping delays forced a delay to their previously planned October 1st debut. Now the Disney Villains – Scentsy Warmer and Wax Collection will not be available for purchase until October 26th and unfortunately, if you live in Europe, Australia or New Zealand you can expect the delay to last until early November.

All Disney Villain Scentsy products will be available for purchase online or from your local Independent Scentsy Consultant on October 26 at 1 p.m. ET while supplies last. When Scentsy releases an updated timeline for Europe, Australia and New Zealand or any other update Inside the Magic will be sure to let you know. This is sure to be a popular collaboration so make sure you order early once the collection becomes available!

Are you excited about the Disney Villains Collection from Scentsy?