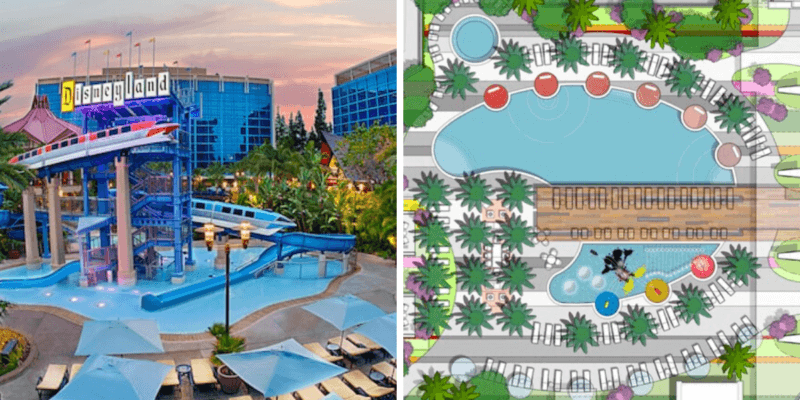 As Disney fans everywhere celebrate Disneyland’s 65th Anniversary today, more concept art for the new Disney Vacation Club tower planned for the Disneyland Hotel has been revealed. We at Inside the Magic have kept up with this story and have added new information.

First shared over Twitter by @ScottGustin, the new concept art includes a “water feature” area with Mickey Mouse incorporated in the design. The 12-story tower also has a very elegant style in keeping with the retro appeal of the resort and will have 350 rooms that include 2 grand villas, 19 1-bedroom units, 20 2-bedroom units, 38 pod studios, and 253 deluxe studios.

Here’s a look at the Mickey-themed “water feature” area at the proposed 12-story DVC tower at Disneyland Hotel.

According to the Orange County Register, this new DVC timeshare tower’s interactive water feature will have water jets that squirt arching sprays, appearing to “paint” red, yellow and black ink splats in the shape of an abstract Mickey Mouse on the bottom of this new swimming pool. Next to it, there will also be a row it 15 fountains side-by-side and three an-spray gurgler water elements flank the side of the Mickey effect.

We at Inside the Magic have been keeping up with the development of the proposed Disneyland hotel DVC Tower. In May, we reported, among other new details, that there was going to be a pool, spa, and some form of interactive water features. We now have some idea what that entire water area will potentially look like.

The concept art shows the Mickey-themed interactive water area separated from the pool by what appears to be a wooden platform fitted with pool chairs, but the entire ensemble is shaped like an artist’s palette with a spectrum of colors dotted all across the periphery. This pool area will be at ground level directly in front of the new tower.

Disneyland has set a 2023 proposed opening date for the new 280,000-square-foot DVC timeshare tower, but plans are still being considered by the City of Anaheim. Once it is eventually completed, it will be Disneyland’s second DVC property. Currently, only Disney Grand Californian Hotel offers DVC Guests villas. These villas allow Guests to walk directly into Disney California Adventure park.

Have you stayed at the Disneyland Hotel? How does it compare to the other Disney Resort Hotels you’ve stayed in? Do you think Disneyland needs more options for DVC members? Let us know in the comments!

Book a Disney trip with the Authorized Disney Vacation Planners at Academy Travel!