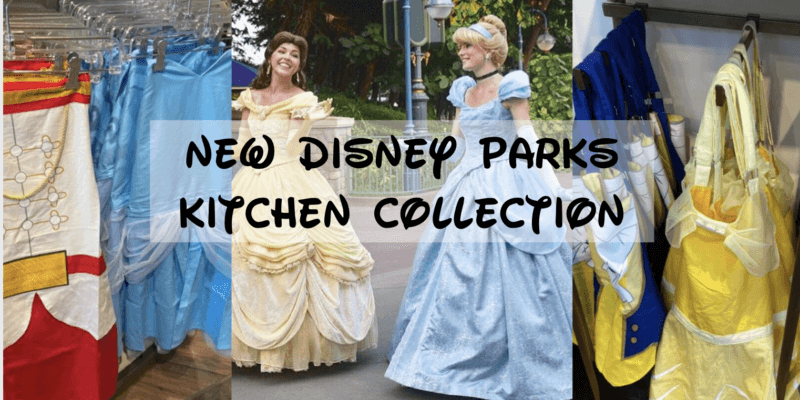 Now that Disneyland’s Downtown Disney District has reopened to the public and Walt Disney World Resort has officially begun the phased reopening of its theme parks (Magic Kingdom and Disney’s Animal Kingdom are open today to those who snagged WDW reopening day reservations!), we can once again bring you coverage of fun Disney Parks merchandise!

The ITM team has recently spotted brand new Cinderella and Beauty and the Beast kitchen accessories at both Disney World and Disneyland Resort.

Anastasia and Drizella merchandise isn’t too common, so these potholders are an especially fun addition to any Disney themed kitchen. Each Cinderella potholder is priced at $19.99 and were spotted inside World of Disney at Disney Springs.

The Cinderella apron and Prince Charming apron are each priced at $34.99 and were also spotted inside World of Disney at Disney Springs.. These would be perfect for any couple who enjoys cooking together!

The aprons are modeled after Princess Belle’s yellow ballgown and Beast’s attire from the famous ballroom scene, which appears in both the animated (1991) and live-action (2017) versions of Beauty and the Beast.

The Chip the cup potholder is one of our favorite pieces in this entire Disney animated film kitchen collection! We also love the towels that showcase Cogsworth and Lumiere during the famous Be Our Guest scene.

Check out the tongs that look like the hands on Cogsworth’s clock face next to the towel. Too cute!

The Beauty and the Beast kitchen gear was spotted inside World of Disney at Downtown Disney in California.

There’s no word yet on if this new Disney kitchen gear will be available online at shopDisney.com or if it is exclusive to Disney theme parks. Which Beauty and the Beast and Cinderella kitchen items do you like best?

Comments Off on Add Magic to Your Kitchen With Disney Movie Kitchen Accessories!