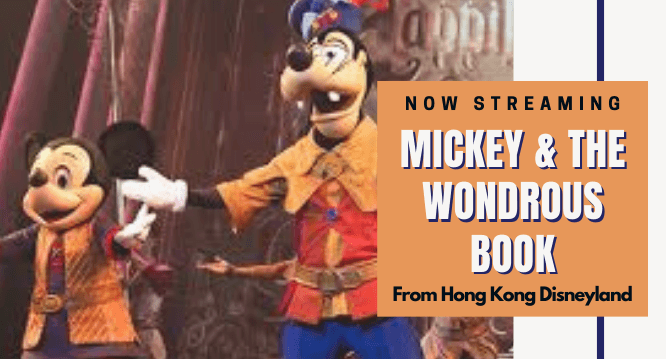 When Tokyo Disneyland released Disney Parks Performances on Youtube to help during the stay at home, we here at Inside the Magic were thrilled. Folks needed this bit of magic and shared it around the world. Now, Hong Kong Disneyland is following in step with a release of Mickey and the Wondrous Book on their YouTube Channel.

What really amazed this writer was the opening song (and it’s lyrics). Originally debuting in 2015 as a ten-year celebration for Hong Kong Disneyland Resort’s opening, Happily Ever After is widely known as the Disney Park theme song for the Happily Ever After Fireworks at Walt Disney World Resort, which first fired off on May 12, 2017. Not yet having attended an overseas Disney park, I thought the song had been written for the spectacular and was so excited to hear about its life before fireworks. The song has been retooled and paced especially for the show, but the nod to its origin is wonderful.

The official Hong Kong Disneyland YouTube Channel posted the full Mickey and the Wondrous Book performance video on June 1 for the world to enjoy, complete with subtitles and original vocals. You’ll see and hear all your favorite Disney characters in this magical stage attraction that we hope to see in person in Hong Kong one day!

Disney stories always draw up the fondest memories ??Join us down memory lane with “Mickey and the Wondrous Book”, and tell us which story was your favorite!  – Hong Kong Disneyland YouTube Video

Proclaimed to be a “new and spectacularly unique ‘Happily Ever After’ show” on the Hong Kong Disneyland website, this book-like stage show in Hong Kong’s Fantasyland was “created to bring to life new and classic Disney stories and movies in an exhilarating, musical revue stage production like no other!” Disney’s Storybook Theater is amazingly transformed into a library where endless adventures take place; even the stage facade looks like an enchanted storybook page! Mickey and the Wondrous Book entertains Disney fans with a 28-minute musical revue featuring a cast of live vocalists, Disney characters, and dancers. As every book page turns, a new story is reviewed, revealing a grandiose and extravagant musical production number!”

Have you seen this Hong Kong Disneyland Resort attraction? Leave us a comment about your favorite Disney Stories featured!