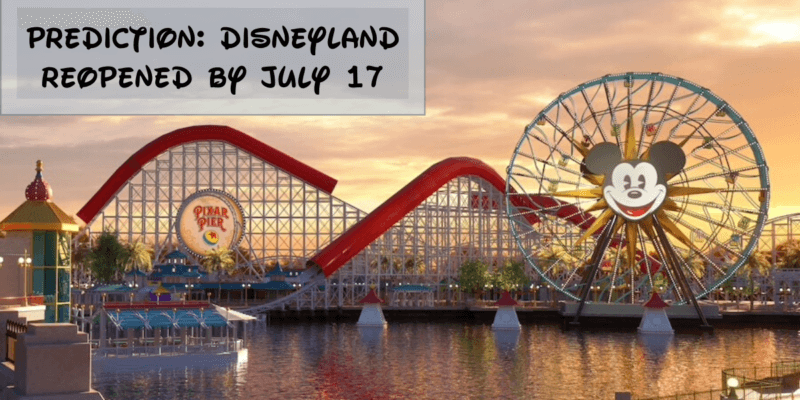 As Disney fans across the country are focused on Central Florida and counting down the days until the Walt Disney World Resort begins to reopen theme parks on July 11, one has to wonder about its older sister in California.

While keeping tabs on any park updates, we at Inside the Magic reported that it was still possible to book reservations and purchase general admission tickets at Disneyland Park for as soon as July 16. On top of that is the optimistic status of California’s phased reopening. In late May, Governor Gavin Newsom confirmed that Disneyland would be allowed to reopen in Phase Three of his Four-Phase reopening plan.

As of right now, Orange County, which hosts the Disneyland Resort and the city of Anaheim, has been operating in full Phase 2 for a few weeks. According to an article in the LA Times published on June 9, Phase 3 is set to begin as early as June 12. This would give Disneyland more than a month to properly prepare for an official reopening as well as follow Shanghai Disney and Walt Disney World’s lead in first reopening their shopping and dining district, Downtown Disney.

Now, there’s little doubt that Disneyland will also reopen at limited capacity, and would require the use of a park reservation system. But unlike Walt Disney World, it already has one. Disneyland’s Annual Flex Pass requires passholders to make a reservation before visiting the park. The pass is only valid on days reserved (or on days that do not require a reservation; most of the reservation-required days occur during weekends and peak seasons).

Disneyland would simply have to find a way to incorporate all other Annual Passport tiers and already-purchased general admission tickets into the reservation system that is already in place for the annual passholders who have a Flex pass. But when compared to having to create and launch a whole new system, it appears as a much smaller learning curve.

Disneyland’s competition, Universal Studios Hollywood, is also showing positive signs that it is moving closer and closer to reopening. Earlier, Inside the Magic reported that, according to The Hollywood Reporter, “the International Alliance of Theatrical Stage Employees sent a note to its members saying that Universal may reopen the CityWalk (shops and restaurants) section ‘on a limited basis’ as soon as June 8.” While the CityWalk area remains closed, the note also conveyed mild confidence in a July reopening.

However, it’s important to note that Universal Studios Hollywood is located in Los Angeles County, and Disneyland Resort is located in Orange County, both of which have been reopening at different rates.

It Would Just Be a Very “Disney” Thing To Do

The Disneyland Resort is enduring an unprecedented closure period. If it did reopen its gates by July 17, it would mark a closure streak of over 120 consecutive days in a very “Disney/fairy tale” way. Reopening the Happiest Place on Earth just in time to have Guests return and celebrate its 65th birthday would be the ultimate happy ending to such a dark chapter in its history. Reopenings are triumphant, happy occasions. Adding a birthday celebration on top of it would be a fairy tale ending that only Disney could truly pull off.

Do you think the Disneyland Resort will reopen in time for its 65th Anniversary Celebration? Why or why not? Let us know in the comments!

Comments Off on OpEd: Why the Disneyland Resort Could Reopen by July 17