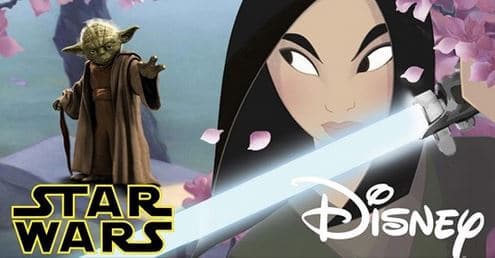 Disney musical crossovers can be fun, especially when they feature favorite characters from various worlds. Thanks to the imaginative videos from Michael and Paul Clarkson we can now see what happens when Classic Disney Animation invades a galaxy far, far away.

We’ve already seen Star Wars and Disney mashup characters thanks to Star Wars Weekends and enjoyed a trio of Family Guy parodies. Now, it seems that Disney characters like Jedi Mickey and Darth Goofy have been upstaged! 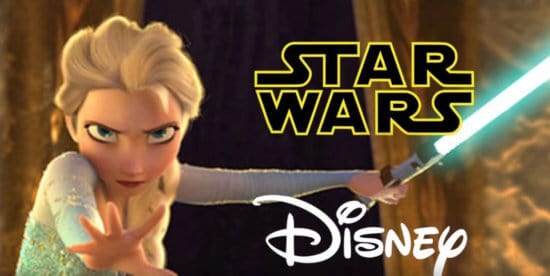 Directors Michael and Paul Clarkson (aka the Clarkson Twins) hail from the United Kingdom. According to their YouTube profile, they’ve written for projects like The Haunting of Bly Manor, The Wheel of Time and His Dark Materials.  However, for their video creation channel they’ve taken a different turn by sharing a series of Star Wars/Disney Musical Crossovers.

Welcome to our channel – which is basically an altar to our love of Star Wars episodes 1-6 and our love of Disney animated musicals. Anything under the ‘Box Step Productions Banner’ was made with writer/producer Gemma Hurley, including our cult hit play “Death Ship 666!” – the epic disaster parody which critics have hailed as “Airplane!” meets “Titanic”. More of Gemma’s work can be seen at ShutUpInfinity. Enjoy & Subscribe if you just need more Star Wars in your life. – The Clarkson Twins via YouTube

Imagine Yoda teaching Luke how to be a hero on Dagobah. Now take that setting and apply the music of Mulan.  Thanks to the amusing work of The Clarkson Twins, fans can now witness Yoda make a man out of Luke.

Elsa’s character may not have joined the dark side, but, her most popular song seems to have been adapted into a Star Wars prequel villain theme of its own.

Since he hails from the aquatic realm of Naboo, it’s only fitting that Jar Jar Binks takes over for Ariel and company with this amusing musical number.

For fans wanting more of this crossover special kind of musical madness, check out this collection of songs.  Be prepared to groan and sing along to mock movie: Star Wars Disney Musical – Part 1. (Find Part 2 here)

What if Disney acquired Harry Potter?

Of course, the above comical crossovers can also be a testament to why Disney and Star Wars should NOT share the same universe.  That very thought might have contributed to J.K. Rowland just saying, “No.” to Disney.  It’s almost painful to imagine Huey, Dewy and Louie as Weasley siblings.

For those needing further proof (or encouragement?) we present this magical crossover from Whitney Avalon.  Here, Professor Dolores Umbridge channels her inner Ursula.