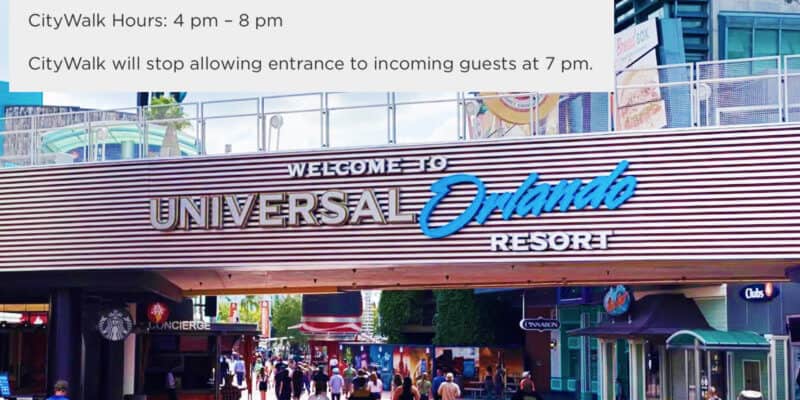 Universal Orlando’s CityWalk will begin following in the footsteps of Disney Springs by closing at 8:00 p.m. beginning today on account of Orange County’s indefinite 10:00 p.m. curfew.

The countywide curfew comes from Orange County Mayor Jerry Demings following recent protests in Orlando due to the killing of George Floyd.

Until this curfew changes, it seems Universal CityWalk will no longer be allowing incoming guests as of 7 p.m. daily.

Universal Orlando’s CityWalk was already under limited operating hours following the entertainment center’s recent reopening amid the current pandemic with a closing time of 10:00 p.m. Prior to Universal Orlando’s temporary closure, CityWalk typically would remain open until well after midnight.

This news comes on the heels of Disney Springs’ announcement of earlier closing times following the county curfew with the entertainment shopping center closing at 7:00 p.m., beginning today.

At this time, the countywide curfew is in effect “until further notice.” It’s safe to say both Disney Springs and Universal CityWalk will be abiding by these new hours until the end of this new order.

Universal Orlando theme parks are set to officially reopen to the public beginning next week on June 5. Although, beginning tomorrow, June 1, the theme park resort plans to allow team members to come in to get whatever learnings they can before opening to the public.

Then, beginning on June 3 and June 4, Universal Orlando plans to begin welcoming some invited guests and annual passholders to test these new precautions prior to their official opening to the public later in the week.

Upon reopening, both Universal theme parks plan to abide by the following social distancing measures:

Are you planning on visiting Universal Orlando? Let us know in the comments.