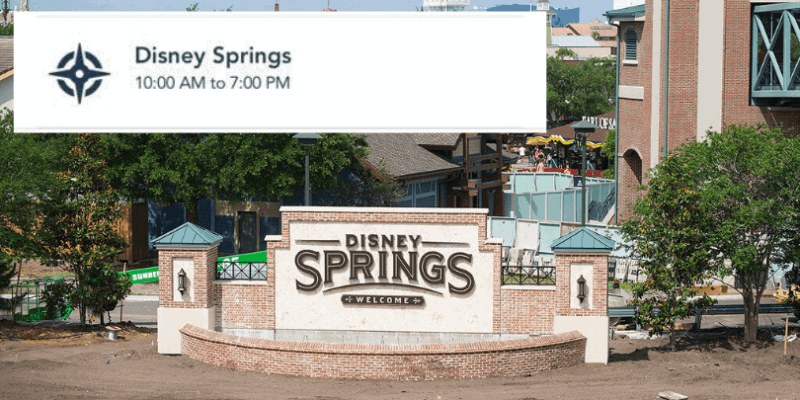 Disney Springs at Walt Disney World Resort will close early tonight due to a county-wide curfew.

In response to protests that began around the U.S. after the killing of George Floyd, Orange County Mayor Jerry Demings has enacted a curfew beginning this evening. The curfew will continue until further notice. Because of this, Disney has adjusted Disney Springs operating hours so that the shopping, dining, and entertainment district at Walt Disney World Resort will close tonight at 7 p.m.

The operating hours of Disney Springs have also been adjusted on the official Walt Disney World Resort app, My Disney Experience, to show that the shopping center will close at 7 p.m. nightly until further notice to comply with the curfew in effect. Even though the curfew mandates that all people must be home by 10 p.m. nightly, Disney Springs closing at 7 p.m. allows for all employees and Cast Members to have enough time to make it home every night.

You can read the statement on the curfew from Orange County below:

All pedestrian and vehicular movement, standing and parking, except for individuals commuting to and from places of employment, the provision of fire, police, emergency and hospital services, medical patients, utility repairs, state and local government employees providing services, and emergency calls by physicians within the above curfew area, are prohibited during curfew hours. Curfew hours during which such movement is prohibited shall be each day from 10:00 P.M. until 5:00 A.M., commencing Sunday, May 31, 2020 until terminated by executive order.

The Walt Disney Company also released a statement today in light of the current unrest in the United States, which you can read here.

We will keep Inside the Magic updated with the latest information pertaining to Walt Disney World Resort operations as it is released by Disney. We hope that everyone continues to stay safe during this time.