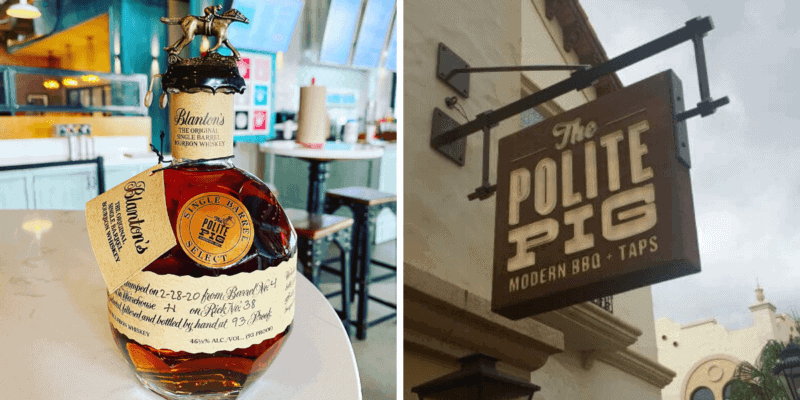 As Disney Springs restaurants begin to reopen, several are finding their own way to celebrate the occasion. Disney Springs Starbucks has started selling a very special “Welcome Back” Frappuccino, and City Works Eatery & Pour House has promised new menu items when it reopens.

Now, the Polite Pig has unveiled a very special treat: Its own Private Barrel of Blanton’s Burbon!

The Disney Springs restaurant took to twitter exclaiming, “This just in – we have received our own PRIVATE BARREL of @BlantonsBourbon. Come and kick off the holiday weekend with us.”

Blanton’s is an award-winning bourbon distilled in Kentucky and has a legendary reputation among whiskey enthusiasts.
According to its website:

Single Barrel Bourbon started with Blanton’s in 1984. Nearing retirement, Master Distiller Elmer T. Lee was tasked with creating a bourbon of exceptionally high quality. With careful reflection, he recalled the earlier days of his career in the late 1940s when he worked under Colonel Albert B. Blanton. Colonel Blanton was the president of the distillery until 1952. Mr. Lee remembered that when Colonel Blanton would entertain dignitaries and other important guests he would handpick “honey barrels” from the center cut of Warehouse H and have that bourbon bottled one barrel at a time. As a tribute to Colonel Blanton’s old tradition, Elmer T. Lee decided to name this new bourbon “Blanton’s Single Barrel”.

Ordering and receiving a Private Barrel of Blanton’s Bourbon is a reason to celebrate in itself as the demand for their Barrel Selection Program is in extremely high demand with limited barrel picks. But the program is an almost magical journey in itself. After selecting your brand, you can visit the distillery of your choice to take a private tour or choose to have samples delivered. The program’s Master Distiller will then personally select a barrel for you. After that, you will get to choose the size of your bottle. Typically a single barrel can produce on average 180-240 bottles.
But this magic comes at a cost. According to the program’s website:

The process takes approximately eight weeks from the time you finalize your selection, to when your bottles and empty barrel arrive at the retail store. The cost for a barrel ranges between $4,000 and $15,000 depending on the number of bottles your barrel yields, and the price negotiated locally by the distributor and retailer.

The Polite Pig at Disney Springs boasts an outstanding food and drink menu that easily holds itself to the Disney Standard. The addition of its own Blanton’s Bourbon Barrel will only continue to raise that bar even higher and provide yet another exclusive experience only found on Walt Disney World property.

Are you a Bourbon fan? Are you surprised to see The Polite Pig order its own Blanton’s Barrel? Let us know in the comments!