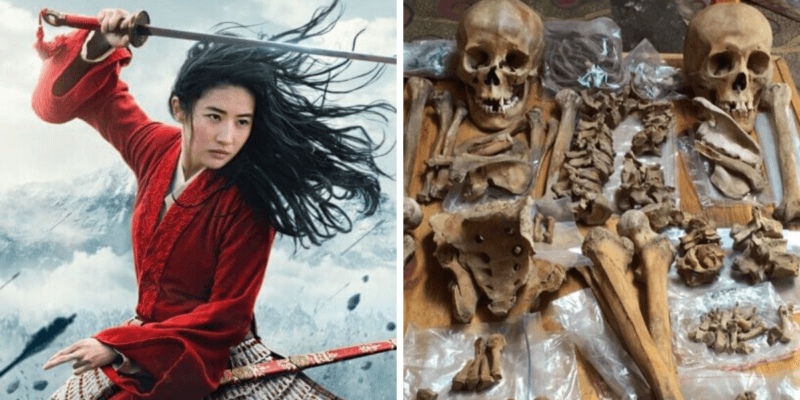 Was there actually a real warrior woman named Mulan? “The Ballad of Hua Mulan” has been passed down in Chinese literature for almost 1,000 years before it was made into a beloved Disney animated film and a live-action remake with Liu Yifei. But the inspiration behind the story still remains shrouded in mystery.

Was she an actual person, or was she a fictitious character inspired by real warrior women? A recent archaeological find has anthropologists believing it is the latter.

Anthropologist Christine Lee reported that the Airagiin Gozgor site in the Orkhon Province of Mongolia. possibly plays host to some warrior women who were part of a nomadic people called the Xianbei. The skeletons of these women showed the tell-tale signs of seasoned Mongolian warrior training–horseback riding and archery–and there is reason to suspect they or their peers were the original heroic inspiration behind the legend of Mulan.

When and where did we get the story of Mulan?

Composed into the story we know today in the 6th Century AD, “The Ballad of Hua Mulan” is said to take place between 386-536 AD in what is known as the Northern Wei era. Northern Wei was a section of northern China which stretched from modern-day Beijing to the southern pars of modern-day Mongolia. It was occupied by the Xianbei people after being displaced by Turkish rivals several centuries before, meaning their own legends and folklore could have spilled over and adopted into the Chinese culture.

While the story of the legendary warrior we know today was transposed into a ballad in the 6th Century, the story of Mulan was also found scattered in several earlier ancient Chinese texts. But many academics believe the compilation to be simply a new version of a story that stems from events during several centuries of violence and political upheaval that would arguably require women to take up arms: The fall of the Han Dynasty in 220 AD.

How do we know they were trained warriors?

Christine Lee is an anthropologist at California State University, Los Angeles, specializing in the East Asia region and has conducted research on the find which consists of 29 bodies in total with her colleague Yahaira Gonzalez. They can tell is a skeleton belonged to a warrior based on the marks left on the bones.

According to New Scientist:

Three of the skeletons belonged to Xianbei women—and two were potentially warriors. Lee and Gonzalez reached this conclusion partly due to the nature of marks left on the bones where muscles once attached. The marks are larger if the muscle was heavily used, and the pattern of marks on both women’s skeletons suggests they had routinely worked the muscles someone on horseback would use. There were also indications that they practiced archery.

But the skeletons of these women are missing one thing found on other battle-worn dead: trauma. That, along with the skeletons being found in a burial mound, suggests these women were members of elite nobility. “It may be that the elite were not allowed to actually engage in hand-to-hand combat at this time,” said Lee. If so, it was not always the case.

Mongol women are daughters of warrior queens who gave birth in the battlefield while fighting pregnant. Don't you dare tell us to stay away from politics of our nation and stick to the kitchen! pic.twitter.com/h2wQqc3ZpC

Legends of warrior women have been told in stories, poems, and songs, not just that of Mulan. And written records from the Khitan Period (~900 AD) and through the Mongol Medieval period tell of Queens leading their armies into battle.

So, why aren’t these stories of warrior women common knowledge?

“Historically, archaeology has been a very male-dominated field,” Lee explained, blaming it for the establishment of the biased view of women as simply wives and mothers. “I was thinking, if there are all these stories, then why hasn’t anyone ever found these women? It’s only because nobody was looking. I thought it was time to look.”

Lee had organized an entire symposium at the American Association of Physical Anthropologists conference called “The Hidden Lives of Women.” According to Ars Technica, her own contribution was “centered on women warriors, specifically the nomadic women who lived north of the Great Wall of China thousands of years ago.” If there ever was a real Hua Mulan, there is a good chance she, her colleagues, or the next great female archaeologists will find her.

Do you think there was a real warrior woman named Hua Mulan? Let us know in the comments!

Comments Off on Scientist Finds Remains of Warrior Woman, Possibly the Inspiration for “Mulan”