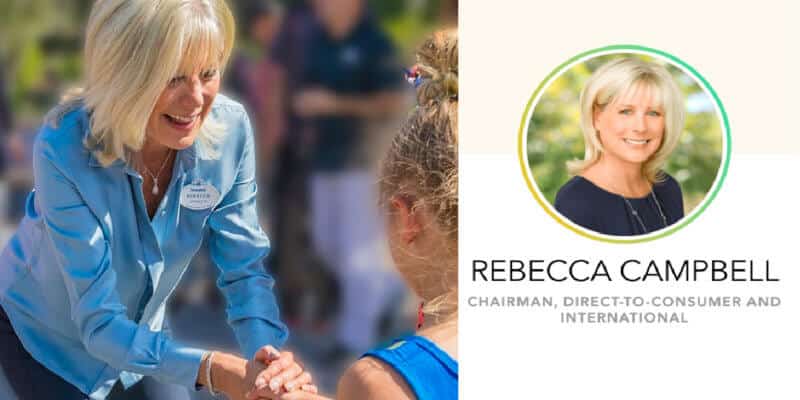 As you may have heard, Disney Parks, Experiences and Products has recently announced a new leadership team to be appointed in the near future. With the announcement, Disneyland fans may have noticed that Rebecca Campbell, who was just appointed as President of Disneyland Resort this past November, has now been appointed as President of Direct To Consumer & International. Some may be asking: who is Rebecca Campbell?

Rebecca, graduate of Bloomsburg Unversity in Pennsylvania with a dual major journalism and political science, has been a part of The Walt Disney Company for many years. She first began her Disney career in 1997 as Vice President of Programming at WPVI-TV in Philadelphia, PA. Since then, she has demonstrated her versatility, working in multiple facets of the company across the world, from New York to Europe.

In a recent interview with Variety, former president of ABC/Disney Television Group Anne Sweeney, who worked closely with Rebecca, had this to say about her:

“She’s tenacious and she’s a great executive. She’s a strong and thoughtful manager who really knows her [executive team] and their strengths and weaknesses.”

During her brief presidency of Disneyland Resort after former President Josh D’Amaro became president of Walt Disney World Resort, Rebecca oversaw significant park events, such as the opening of Rise of the Resistance and Disneyland Resort’s closing in March due to COVID-19. Rebecca can be seen in many photos and videos embracing and supporting Cast Members, who were understandably upset due to the park closure. She has actively been visiting the parks during the resort’s closure to lend support to Cast Members who are continuing to make magic.

What a fantastic way to start the day …. we got together for a Cast photo as we get ready for tomorrow’s opening of Star Wars: Rise of the Resistance. Special thanks to all of our amazing Cast and Imagineers! #castmemberlife #starwarsriseoftheresistance #disneyland

A post shared by Rebecca Campbell (@rebeccacampbelldisneyland) on Jan 16, 2020 at 7:20am PST

President of Direct To Consumer & International

The Cast Member reception to Rebecca’s presidency has been very positive, and she always seems genuinely excited to be in the parks and interacting with Cast Members. While it is sad that her role as President of Disneyland Resort has ended so quickly, Rebecca seems to be the perfect fit for her new role as President of Direct To Consumer & International based on her prior experience. With this new role, she will oversee digital media of many prominent facets of the company, such as ESPN and Disney+. Her background in television and media in the company for more than two decades has surely prepared her for this role, and we are eager to see how she enters this new phase of her career!

Comments Off on Why We Are Rooting For Rebecca Campbell, New President of Disney’s Direct to Consumer & International