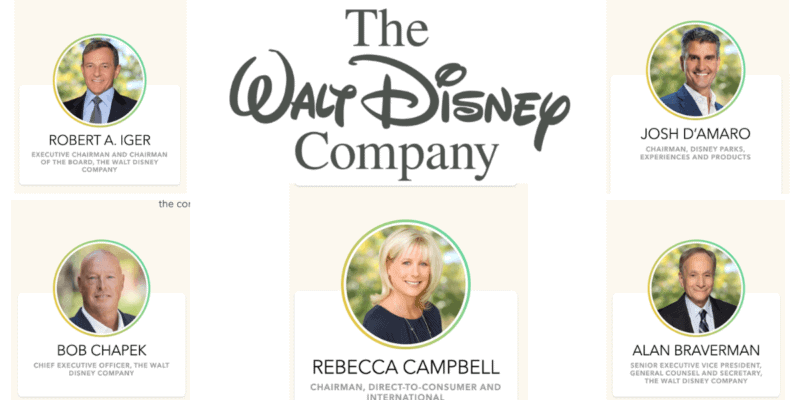 Do you see a trend here? All male. Mostly white.

As a Hispanic female, my initial reaction was to notice this was a very predominately white male stacking, not unusual for corporate America, or Disney. But before we jump to any conclusions here, let’s take a look at Disney’s leadership and asses the current situation.

Here is a picture of the current leadership for the Walt Disney Company:

You know what they say, a picture is worth a thousand words.

Not one person looks like me. Or my circle of friends for that matter. Who, for the sake of clarity, includes female engineers, lawyers, deans of HBCU, PhD, RN-BC, stay at home moms, and the gamut of social representation.

When you fail to have leadership that reflects your customer base, you set yourself up for hardship. It’s essential to take into consideration a diversity of opinions and lived experience. Disney has done so much work moving away from the tokenization of people of color and female/women characters. It’s a shame their leadership continues to default to white male.

In a modern, socially responsible society, equal opportunity should reign supreme. While the “best” person for the position should be always be considered, a balanced racial, experiential, and economic melting pot that makes our country great can only result in an equitable company. So, has Disney successfully accomplished this?

A recent story comes to mind having to do with a female powerhouse for Disney. Or former, rather, Catherine Powell.

Catherine Powell’s Disney journey did not end in happily ever after. Powell was a powerhouse; President of the Disney Parks, Western Region, where she oversaw Disneyland, Walt Disney World, and Disneyland Paris. However, after what Disney considered a massive failure of the Star Wars: Galaxy’s Edge opening, rumors swirled that she as forced to resign.

Shortly after the fiasco went public, Powell shared on her LinkedIn profile what seemed to be a confirmation of the rumors. She posted:

“Apparently Walt Disney himself said “You may not realise it when it happens, but a kick in the teeth may be the best thing in world for you”! I cant say gratitude was front of mind when it happened. But some weeks after learning I was leaving Disney, I can reflect with immense appreciation on the opportunities and experiences afforded to me and my family.”

An unfortunate ending for a promising female leader. Powell is now Head of Experiences at Airbnb according to her LinkedIn profile.

Hope for the Future – Rebecca Campbell

However, before we burn the house of mouse down, because let’s be honest, we love it just as much as you do, let’s take a look at the representation that is there! And, truly, it wouldn’t be a Disney story without a happy ending and some hope for the future, right? Enter Rebecca Campbell.

Campbell isn’t like any typical Cinderella story. She was a strong contender from the beginning of her career with belt-notches tied to ABC, a long tenure with Disney, and many accolades, some even prior to working for the media conglomerate, including “being named Broadcaster of the Year in 2013 by the Pennsylvania Association of Broadcasters, being recognized as the Disney VoluntEAR of the Year in 2015, and receiving the “Excellence in Mentoring” award in 2016 from the Big Brothers/Big Sisters of Greater Los Angeles” according to her bio on the Walt Disney Company website. That is nothing to sneeze at!

Campbell was just promoted to Disney’s Chairman of Direct-to-Consumer & International on Monday put her in charge of Disney+, Hulu, Hotstar and ESPN+.

“Our company is very fortunate to have a deep bench of talent and we’re extremely pleased to welcome these two exceptionally qualified Disney veterans to our senior management team,” Mr. Chapek said. “Both Josh and Rebecca have more than two decades of leadership experience with the Company, a keen understanding of our brands and businesses, and a shared passion and vision for delivering extraordinary entertainment and one-of-a-kind experiences.”

Here’s where we get really encouraged at Disney’s more diverse future… If Disney will continue its trajectory in a similar path as we’re seeing with Josh D’Amaro, Campbell’s promotion is similar in its path, going from being Disneyland President to her new position in the Direct to Consumer for Disney. This almost mirrors D’Amaro’s journey with the company. Could this indicate a possible future female CEO for Disney? It appears D’Amaro and Campbell have similar odds at the position. Only time will tell. But we’d be thrilled to experience that whole new world with you, Campbell!

Other mega-corporations, like Apple, seems to have solid diverse representation, with the likes of Angela Ahrendts, Apple’s senior vice president of Retail and Online Stores who earns nearly twice as much as Apple CEO Tim Cook. Talk about breaking the mold!

We hope Disney continues to allow amazing female leaders like Campbell to rise to the top, so next generations don’t have to endure the hardships of past generation, male-traditionalism to be the norm, but rather, a new norm where gender and social stratification is vanquished for good!

What are your thoughts? Do you feel like there is enough diverse representation in Disney and other big companies? Or do you feel they could still make an effort to include a more diverse leadership team moving to the future? Let us know in the comments!