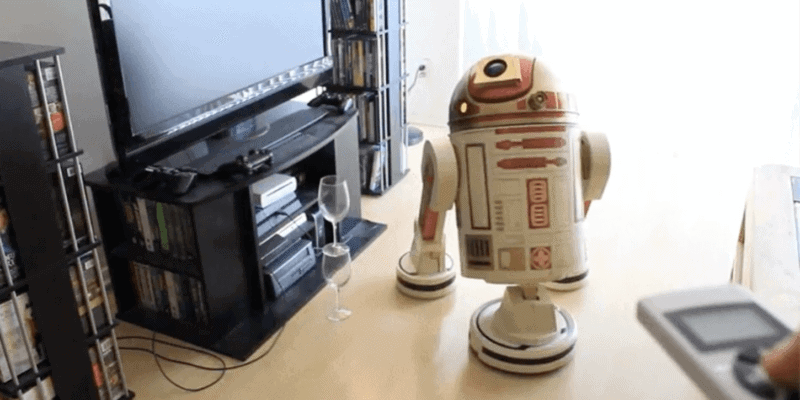 R2-D2 has been an iconic member of the Star Wars franchise since its premiere over 40-years ago. Mostly, for his flashing lights, smooth movements, and ability to save the day in a pinch. Arguably, these are also all the characteristics that make up a great vacuum cleaner as well, which is exactly what this man was thinking when he transformed his Roomba into this deep-cleaning droid.

The video, shared by YouTube user MatthewScottHunter, describes the inspiration behind the dirt eliminating droid, which actually came about from a trash can in his parking garage.

For those wondering why the droid isn’t an exact replica of R2-D2, its creator wasn’t able to get the shape of the body right given the size of the vacuum’s front foot (the Roomba). So instead, he made it into a custom astromech droid, R9-D9.

Fitting in this theme of trash, the robot’s body is made of a trash can with the combination of a few pieces of wood and nicely painted poster board.

This is all in addition to a few household items such as a bottle top from a Vitamin Water bottle and an altered desk fan, which moves the droid’s head in a circular motion. The fan is powered by a small rechargeable USB battery found at the base of the droid.

To make the droid even more life or droid-like, the creator also added Bluetooth speakers so it could make internal noises similar to R2-D2.

In total, the droid weighs about 14 pounds, which appears to be just light enough to be pulled by the robot vacuum.

It’s worth noting that as cool as this droid extension on this Roomba is–it does prohibit the self-propelled vacuum from getting under your couch and other hard to reach areas.

What are your thoughts on this R2-D2 vacuum? Let us know in the comments!

Comments Off on R2-D2 Inspired Robot Vacuum Is Out of This Galaxy And Can Actually Clean Your Floors!