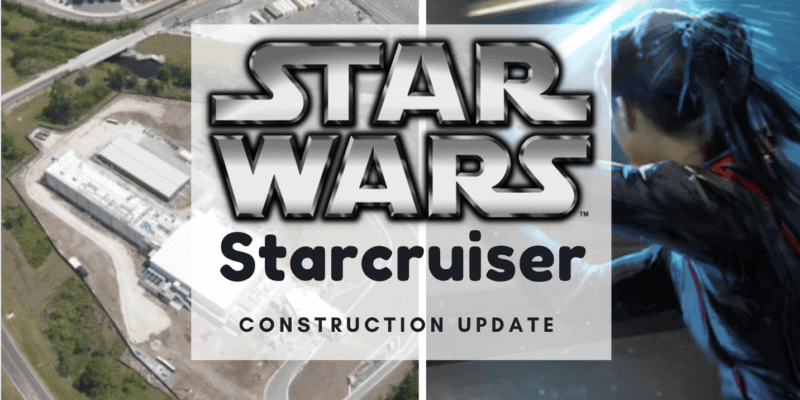 Although Disney Parks executives have not yet announced the reopening date of Walt Disney World Resort’s four theme parks and dozens of Disney resort hotels, construction is moving full speed ahead on the upcoming Star Wars hotel project.

Earlier this week, Twitter user @bioreconstruct shared aerial images of the Star Wars: Galactic Starcruiser hotel, which is increasingly taking the shape of a galactic ship as construction progresses!

In the above aerial photos of Disney World, viewers see the Halcyon’s long hallway leading to a tiered section of the building, which will presumably house the bridge, Silver C Lounge, and other interactive areas for Guests of all ages.

Arrow in this aerial where guests aboard a shuttle ship will travel through between Star Wars Galaxy's Edge and Star Wars Galactic Starcruiser (hotel). pic.twitter.com/jr3UzAOwtm

In this photo, @bioreconstruct shared some updated information about the route that Star Wars resort Guests will take to “travel” between Star Wars: Galaxy’s Edge and the Star Wars: Galactic Starcruiser.

Although we don’t know a lot of details about the full Halcyon experience yet, Walt Disney World officials and the Imagineering team have shared that it will involve a “2-night all-immersive adventure” in which travelers’ only stop will be on Batuu (the outpost at Star Wars: Galaxy’s Edge).

Guests will board the star cruiser in a launch pod and enter an exciting world of Star Wars storytelling. This is a dream trip for any Star Wars fan who has always wanted to visit a galaxy far, far away!

The @bioreconstruct images only show exterior progress on the Star Wars: Galactic Starcruiser construction project, but Disney also recently filed a permit for “set installation” inside the new resort.

This indicates that interior work is also ongoing. In addition to the passenger cabins, which will look like they belong on an exotic, luxury passenger starship, there will be multiple common areas. The Orange County construction permit did not specify where in the Star Wars hotel sets are being installed.

It is important to note, however, that if you sign-up to stay at the new Star Wars hotel, you will be participating in the fully immersive experience and will not be able to visit the Magic Kingdom, EPCOT, or other areas of the Walt Disney World Resort complex until your 2-night Halcyon excursion comes to an end.

Will you be booking a trip on the Halcyon luxury starship when it opens in 2021? Let the expert Disney Vacation Planners at Academy Travel help you plan the perfect Disney park journey for you!