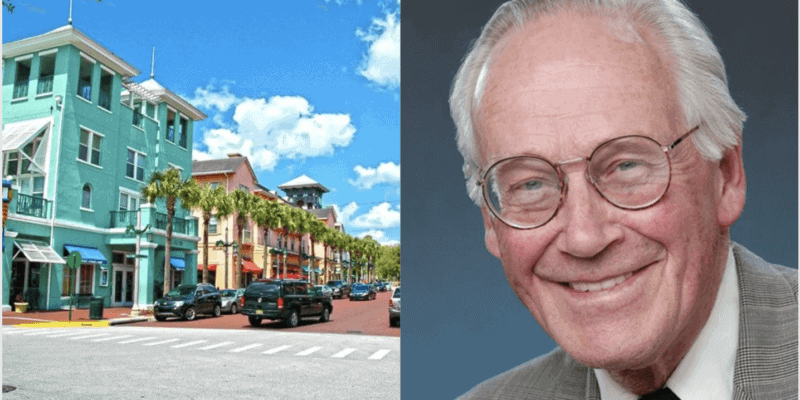 Architect Jaquelin T. Robertson passed away on May 9 at age 87. He worked in multiple projects for The Walt Disney Company during his lifetime.

As per the New York Times’ report on his death, Robertson’s wife, Anya Robertson, confirmed that her husband passed away from complications of Alzheimer’s Disease.

Robertson was an esteemed architect who worked on two notable Walt Disney Company projects. He was the mastermind behind the Celebration, Florida planned community near Walt Disney World Resort and Val D’Europe, a Marne-la-Vallée, France neighborhood that was also developed in conjunction with Disney.

Disneyland Paris is located in Marne-la-Vallée and the planned Val D’Europe community is similar in concept to Celebration, Florida. Both of these projects served as predecessors to Disney’s Golden Oak luxury community that is located just outside of Disney World in Orlando.

Outside of his connection to the Walt Disney Company and Disney Parks, Robertson had a distinguished career. He served as the Dean of the University of Virginia Architecture School for nearly a decade, from 1980 to 1988, and was the first director of the New York City Mayor’s Office of Midtown Planning and Development.

Uniquely passionate about both urban living and classical architecture, the New York Times stated that “there was no inconsistency between his love of grand classical architecture and his passionate belief in cities: It was all about finding ways to turn time-tested ideas to the benefit of modern life.” This made Robertson the perfect fit for Disney building projects.

Former Walt Disney Company Chariman and CEO Michael Eisner took to Twitter to remember Jacque Robertson. He wrote, “Sad to hear of the passing of Jacque Robertson; a wonderful man. Past dean [sic] of Architecture at the University of Virginia. For us at Disney, he developed the master plan for Euro Disney, Celebration in Orlando, and many more buildings. A true gentleman.”

Sad to hear of the passing of Jaque Robertson; a wonderful man. Past dean of Architecture at the University of Virginia. For us at #Disney, he developed the master plan for Euro Disney, Celebration in Orlando, and many more buildings. A true gentleman. @Disney @DisneyParks @UVA pic.twitter.com/JsAqDQdRWg

The team at ITM sends our sincere condolences to all those who knew Jacquelin Robertson.

Share your favorite moments at Celebration Florida or Disneyland Paris in the comments!

Comments Off on Jacque Robertson, Architect Behind Multiple Disney Projects, Passes Away