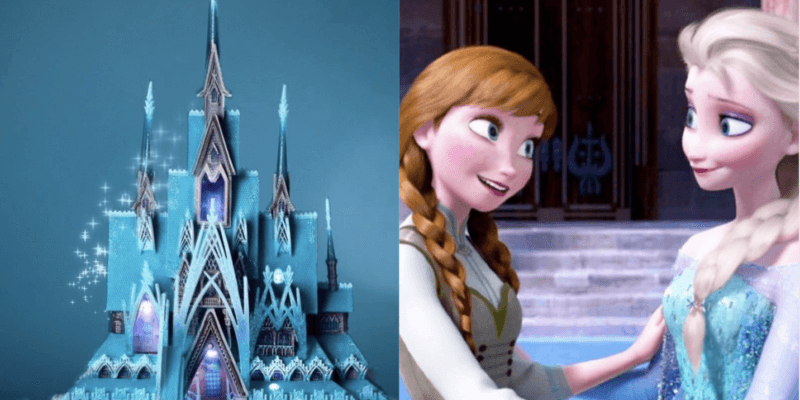 The Disney Castle Collection is a gorgeous new series of Disney merchandise that features that castles where iconic Disney Princesses lived. The first release in April featured Cinderella Castle and it truly was a dream come true!

Head to Arendelle with the second castle from the Castle Collection.? The Frozen Castle Collection releases online at shopDisney on Tuesday 9th June at approx 8am. The collection will include a Light Up Figurine (£120), Hanging Ornament (£22), Pin (£22), Journal (£19) and a Puzzle (£15). Limited to one per person/ two per household. The Frozen Castle collection will only be available online. We will also be launching the Cinderella Castle Puzzle on the same date.

As per the shopDisney UK Instagram page, “The Frozen Castle Collection” releases online at shopDisney on Tuesday 9th June at approx 8am. The collection will include a Light Up Figurine…Hanging Ornament…Pin…Journal…and a Puzzle.”

The Arendelle Castle figurine features enchanting touches, including what looks to be a tiny Elsa figure by the entrance!

In this image of the full June Frozen collection, Disney fans can see the hinged journal, the Ravensburger puzzle, and the Arendelle castle pin in detail.

What’s Next in the Disney Castle Collection?

The Disney Castle Collection line is set to feature 10 Princesses in all, released on a bi-monthly schedule. If the current release pattern continues, we can expect Mulan in August of this year (this will be interesting since Mulan doesn’t actually have a castle), Snow White in October, Rapunzel in December, Aurora in February 2021, Jasmine in April 2021, Ariel in June 2021, Merida in August 21, and, finally, Belle in October 2021.

We love that this exclusive shopDisney merchandise series features non-traditional Princesses like Merida from Brave and Mulan, in addition to classics like Princess Belle and Snow White.