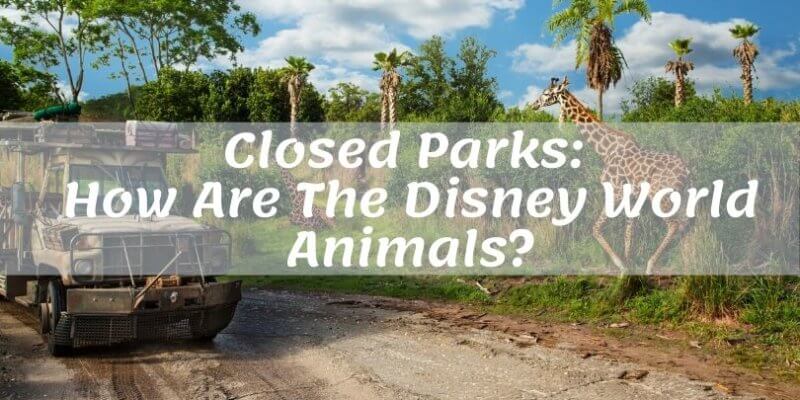 As we scout social media and news outlets to know when the Disney parks around the world will start reopening, we might forget to think about what is going there right now. After all, big gorgeous theme parks like Disney Parks can’t go without some kind of maintenance, or even feeding!

Yes, the animals around Disney World Parks are being taken care of, and according to park officials, doing very well.

This week, the Mark Penning, Disney Parks’ vice president for animals, science and environment, gave an interview to the Orlando Sentinel podcast, called Theme Park Rangers, updating the public on how the animals are doing with the parks closed.

“I’m very confident right now that our animals are in a great place,” Penning said.

Penning also said that the animals are being given choices on what they want to during the day, so they can feel like they are in control of their environment.

“Animals are kind of like people in a sense that they like routine. They like to know what’s coming. And, you know, the surprises are not something that they really want to have too often,” said Penning.

Do The Animals Miss Us?

Penning said that it is hard to tell if the animals are liking, or not, the lack of guests in the parks. But he does recognize that a few might be missing the agitation that guests bring.

“We’ve got this youngish Gorilla, Lilly. Lilly is just the funniest character. She will take a banana leaf, or something like that, or a piece of enrichment, rap it around herself than roll down the hill towards the window where the guests are watching. And the guests find it very funny, and she loves how it make them react. So, she will go and do it again. So, I think she is probably thinking and saying – well, this is a little boring – you know, – were is my audience?”

Penning also mentioned how the animals that have more interaction with guests, like those at the Animal Kingdom’s Affection Section, might be feeling it too.

“There are some animals, like in our affection section, that love contact with people. So, they are standing looking around – Why am I not getting petted today?“

Since it has been shown that humans can transit the C-19 virus to felines, during the podcast interview Mark Penning was asked about what the animal care teams are doing to protect the park’s big cats.

He says that the care teams are following CDC guidelines, and wearing face masks to protect the animals and other staff members.

The animal care team is also keeping up with evolving science and discoveries around the virus by keeping contact with specialists such as virologists, epidemiologists, and pathologists.

“It’s a learning time for all of us, but we are following the guidelines to the letter and being very careful. I’m in contact with the folks at the Bronx Zoo on a regular bases,” said Penning.

“We are really looking forward to opening the park up and sharing the magic of nature you see every day there. We wanna share that with our guests again,” said Penning.

You can listen to the entire 20-minute podcast by accessing the Orlando Sentinel website or going straight to podcast apps and searching for Theme Park Rangers.

Do you have a favorite Disney World Animal you are excited to visit once the parks reopen? Let us know in the comments below.