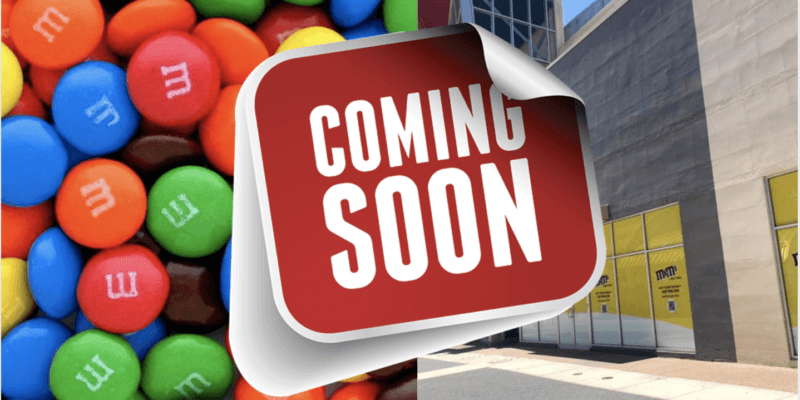 Last December, it was officially confirmed that a new M&M’s Store would be opening at Disney Springs. If you’re a fan of the tiny candies that “melt in your mouth, not in your hand,” you’ll be thrilled to know that progress is being made on the retail space’s storefront!

Located in the Disney Springs West End district, next door to Splitsville, the new M&Ms Store is set to be a colorful space filled with fun for all ages.

In January, the Mars Retail Group debuted concept art for the Orlando M&M’s Store. Current progress on the space seems to be in keeping with the renderings, which showcased a cheerful, bright yellow facade coupled with sleek design. (Our favorite feature is the oversized M&M candies on the building!)

The new Disney Springs M&M shop has been described as an “experimental space,” meaning it will feature new interactive activities and design elements that other M&M’s retail stores don’t have.

One such feature is the Wall of Chocolate. Yum! Additionally, M&M lovers will be able to meet characters and create their own personalized M&M candy when they visit the Disney resort location.

When Will the M&M’s Store Open?

There has been no official word from the M&M Mars Company on when the M&M’s Store will open at Disney World’s shopping and dining district. Now that Disney Springs has begun its phased reopening, however, it seems likely that construction will continue on the space as expected from now on.

The Mars Retail Group has not stated that they will target an opening date other than their original one, sometime later in 2020.

Currently, there is an M&M’s World Orlando store at The Florida Mall. This location will close when the Disney Springs location opens at Walt Disney World Resort.

What Is Currently Open at Disney Springs?

Although the phased reopening of Disney‘s entertainment district surrounding Lake Buena Vista began on May 20, not every store and restaurant is open to Disney park guests yet. World of Disney and other onsite Disney-owned properties, for example, aren’t scheduled to reopen until May 27.

Cirque du Soleil has not yet announced an official debut date for their Drawn to Life show and no Disney resort hotel locations are currently accepting overnight guests at this time.

All visitors to Disney Springs must wear appropriate face coverings and undergo a temperature screening upon arrival.

Are you excited about this innovative new candy store at Disney World? Stay tuned to Inside the Magic for the the next Disney Springs M&M Store update!

Comments Off on When Will the M&M Store Open at Disney Springs?