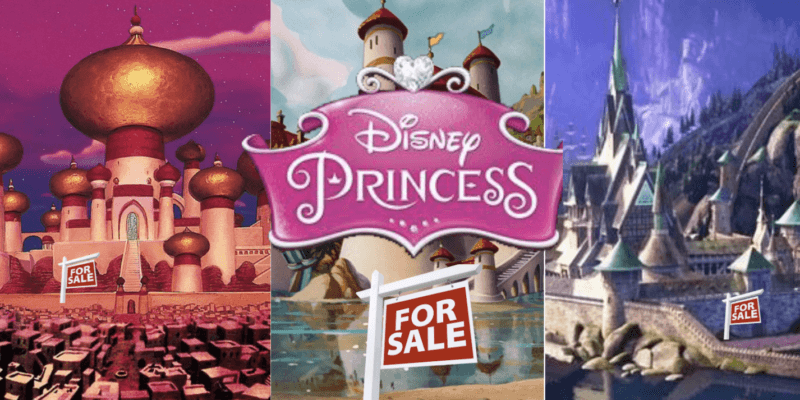 If you’ve been daydreaming of being quarantined in a castle, you’re not alone. Whether you yearn for Belle’s library or you’d rather have Jasmine’s boho bedroom, who doesn’t want to live in a Disney Princess castle?

U.K.-based Mojo Mortgages has taken things one step further and figured out how much our favorite animated Disney Princess castles would cost in today’s market.

Inspired by the world-famous Taj Mahal in Agra, India, the Sultan’s Palace in Agrabah is home to Princess Jasmine. The independent princess might long to live outside of the palace walls, but the rest of us wouldn’t mind her incredible courtyard, gorgeous balcony, and maybe a magic carpet…

Mojo Mortgages estimates that Jasmine’s palace would cost approximately $970 million today! We don’t know about you, but we might need to get a second job.

In the animated Disney version of Beauty and the Beast, Beast’s Castle starts as Belle’s prison, but becomes her safe haven. The library alone is enough to sell us on the property, which Mojo Mortgages estimates would cost about $36 million. No word on whether or not enchanted objects are included in the selling price.

Mojo based this figure on the Chateau De Chambord in Loir-Et-Cher, France. This gorgeous residence boasts 60 rooms, a ballroom, and stunning gardens, just like Beast’s Castle.

As classic as the Cinderella story itself, the King’s Castle is the quintessential fairy tale castle, replete with 27 turrets and one of the most iconic ballrooms in history. We know you’re humming “So This is Love” right along with us!

It also, of course, served as Walt Disney’s inspiration for his masterpiece, the Cinderella Castle at Walt Disney World Resort. Mojo’s estimate for today’s cost of the King’s Castle is $18 million.

This estimate is based on Bavaria’s Neuschwanstein Castle, which is a popular destination for Disney fans from around the world.

While it is next to impossible to put a value on Queen Elsa’s Ice Palace, Arendelle Castle does have comps in the real estate world. According to Mojo Mortgages, Anna and Elsa’s home, complete with 1,000 salad plates and Scandinavian detailing, would be worth $14 million on the modern market.

Mojo based their property value estimate on the actual costs of high-end homes throughout Norway, especially near the Norwegian town of Arendal, which Arendelle is heavily based on.

Oceanfront property is always costly and Prince Eric’s castle is no exception to the rule. Mojo Mortgage values Eric and Ariel’s beachside home at $12 million. Our favorite feature? The private dock!

Mojo’s real estate estimate for Prince Eric’s castle is based on the asking prices of waterfront castles that are currently on the market in Italy.

Snow White and the Seven Dwarfs (1938) – The Dwarves’ Cottage

Though it isn’t a Disney castle, the Cottage of the Seven Dwarfs becomes more of a home to Snow White than anywhere else she’s ever known. Sleepy, Bashful, Happy, Doc, Grumpy, Sneezy, and Dopey’s woodland home would be valued at about $336,000 if it were listed today.

Mojo Mortgage determined this figure by looking at two-bedroom properties in Devon, England that are based in a similar forest setting, enchantment not included.

We’re ready to put down our down payment! All of these Disney fairy tale castles have great features and bring back incredible magical memories of watching our favorite movies in childhood (and now!).

Despite the modern prices of Disney Princess castles, which one are you ready to move into today? Tell us in the comments!