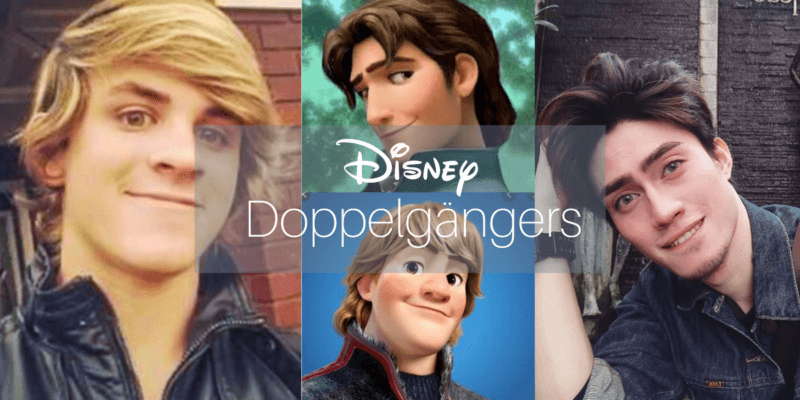 Have you ever been told you look like someone famous? We all have that famous doppelgänger, famous-person counterpart we’re told we resemble. These folks, however, have an uncanny resemblance to Disney characters and will cause to do to a double-take. The likeness is uncanny!

If Disney follows suit on their live-action remakes and eventually finds its way to Frozen, they should most definitely reach out to Cole LaBrant for the role of Kristoff. Look at him! LaBrant found internet fame on the short-video platform Vine, and now has over 11 Million Youtube subscribers in his family’s YouTube channel, the LaBrant Family.

This Flynn got the nose right! Flynn Rider’s Doppelgänger

We’d leave our tower for this Flynn, too Punzie! Instagram user @wahyualmahdali nailed this Flynn Rider cosplay. I think we can all agree, he’s got that smolder down!

Even though we probably all picture Tom Hanks as the real-life version of Woody, thanks to his impeccable voiceover work for the character, this young man is the spitting image of the animated character. Do you agree? The similarity is stunning!

Tik Tok user @carlosesparza looks like a regular guy in this Tik Tok video. But you have to watch till the end. WHOA. It’s Sid, you guys. Toys beware!

The most Incredible Babysitter!

Kari is the ideal babysitter. She has taken courses and learned CPR, has excellent marks and certificates and can produce on demand. Kari, you are HIRED! We wonder if this real-life Kari has the same resume… If so, can you come and watch the kids this weekend? We promise, no superpowers in our family; unfortunately.

This Esmeralda is stunning! And looks so incredibly similar to her animated counterpart in Disney’s The Hunchback of Notre Dame. Her complete look is absolutely perfect!

It’s Carl from Disney’s Up!

Another fantastic real-life Disney character lookalike! This gentleman could easily be confused for Carl, the loveable grouchy old man from Disney•Pixar’s Up. We wonder if he has a pet that looks like Kevin? Now that would be fun!

We are down to paint with all the colors of the wind, if they come with a Hemsworth. He does kind of resemble John Smith from Disney’s Pocahontas. We’ll allow it.

The Latina Elsa? Sure. Why not!

Inside the Magic writer, Emille gets the Disney princess comparison often. Do you agree?

Have you been told you look like a Disney character? Let us know who your Disney doppelgänger is in the comments!

Comments Off on These Real-Life Disney Doppelgängers Look Identical to Their Film Counterparts!