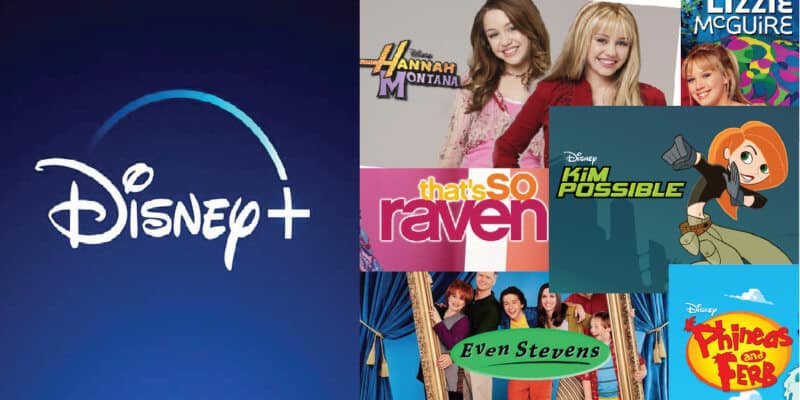 When Disney+ launched last November, fans from all corners were in for a treat. From Marvel classics, Star Wars, and just about all content that falls under the Walt Disney umbrella, it’s all in the palm of your hand with the streaming service. And for 90s kids(myself included), it also allowed for many nostalgia trips with all of our favorite Disney Channel original shows!

So, if you’re looking for a list of shows to watch that feature favorites like Lizzie McGuire or The Proud Family, look no further than our list of the must-binge Disney Channel shows that are currently streaming on Disney+!

Who could ever forget the classic claymation opening of Even Stevens? The live-action series featuring Shia LaBeouf during his early acting days, and his fictional sister played by Christy Carlson Romano, ran for 3 seasons between 2000-2003. When you’re finished watching all 3 seasons, you can even watch The Even Stevens Movie, which serves as the series finale, also streaming on Disney+!

“So what’s the sitch?” It’s that all four seasons of the animated series Kim Possible, as well as Kim Possible The Movie: So the Drama, AND the 2019 live-action Kim Possible movie are all available to stream!

Catch Hilary Duff as Lizzie McGuire and her animated alter-ego for both seasons of the show that ran from 2000-2002. When you’re finished, relive the glory of “Sing to me, Paolo!” and what dreams are made of in The Lizzie McGuire Movie, also available to stream!

The interesting thing about Phineas and Ferb is that it was an animated series that appealed to children and older kids alike as it aired on Disney Channel and Disney XD between 2008-2015. The show’s clever writing, catchy songs (I’m looking at you, “Squirrel’s In My Pants”) and Perry subduing the evil Dr. Doofenshmirtz were genuinely entertaining and landed it a spot as one of the most beloved Disney Channel Series. With the addition of the shorts, specials like Phineas and Ferb: Mission Marvel, and the feature movie also streaming on Disney+, we know what we’re going to do today, Phineas.

With Miley Cyrus, the hit title theme song “The Best of Both Worlds”, and one of the best Disney Channel original movies in history featuring special guest stars like Taylor Swift, it’s no wonder Hannah Montana is arguably Disney Channel‘s most famous series. Get the best of both worlds with all 4 seasons and Hannah Montana: The Movie.

7. The Wizards of Waverly Place (4 Seasons)

Catch Selena Gomez as Alex Russo, and her magical family residing in Waverly Place with all 4 seasons of The Wizards of Waverly Place. The series, as well as both movies, are all currently available to stream.

The live-action Disney Channel original series, featuring Raven Symone during her Cheetah Girls days(also available to stream, hint-hint), was famous for addressing themes such as racism and negative body-image. All 4 seasons, as well as the 2016 revival Raven’s Home, are available to stream.

Following the break out stardom from Camp Rock, follow Demi Lovato as Sonny Monroe in all 3 seasons, which just became available to stream on April 3rd!

Related: This Friday is Sonny With a Chance, Streaming on Disney+!

Another classic favorite, catch Suga Mama, Penny Proud and her squad through both seasons, as well as The Proud Family Movie, and keep an eye out for the series revival which is expected to debut on Disney+ later this year!

Related: OFFICIAL: The Proud Family Revival is in Production!

Did we miss any of your favorites? Let us know in the comments below!

Comments Off on Need Shows To Binge Watch? Check Out Our 10 Must Watch Disney Channel Classics Streaming on Disney+