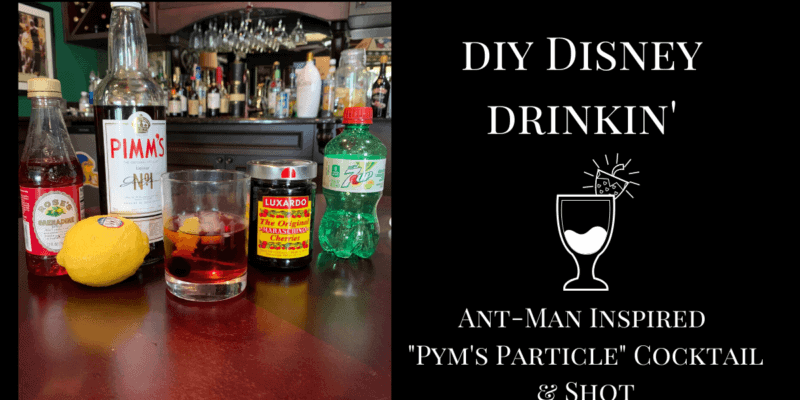 After covering several Disney-official and Disney-inspired drink recipes, this segment of “DIY Disney Drinkin'” is going to give a little attention to the Marvel Cinematic Universe.

I was reading through a book of iconic cocktail recipes when and I came across a drink called “Pimm’s No. 1” for the first time. (My readers in the U.K. would probably be shocked, but we don’t drink Pimm’s here in the United States. And after trying Pimm’s with 7-Up and lemon, I can’t believe I had never had it.) I had just recently watched Ant-Man and the Wasp on Disney+, so the punny “Pimm/Pym” connection struck like a bolt of lightning. I knew right away what my next drink was going to be.

So, without further adieu, I present The “Pimm’s Particle” cocktail and shot.

Here are the ingredients for a single serving:

Pour the Pimm’s into a tall mixing glass first. Then throw in dashes of grenadine (be careful not to add too much) and then pour in your 7-up. Give the mixture a good stir, and then pour it into either a shot glass or a cocktail glass. The original Pimm’s cocktail recipe calls for a highball glass, but I personally prefer to use a short, stout old fashioned glass.

The Pimm’s Particle shot is to be served best in a tall thin shot glass to most closely resemble the actual particle. Colorwise, you should get a bold, dark red elixir almost spot on to the dark red color of Dr. Pym’s particle.

If you are making “Pimm’s Particle” as a cocktail, you will then need to add our heroes to the mix: Ant-Man and the Wasp. Roles played by a maraschino cherry and a slice of lemon peel, we first have Ant-Man drop haphazardly into the quantum realm and then we have the Wasp use her wings to dance around the glass before gracefully triggering the particle to enter the quantum realm herself.

(Translation: Drop the cherry into the glass and let it sink to the bottom. Then take the lemon peel, rub it around the inner rim of the glass, and then let it slip into the drink so it is floating near or on the top.)

What we get is a Marvel-ous combination of cherry and lemon capped with Pimm’s unique taste and a spritz-y sensation from the carbonation. And something that Scott Lang’s best friend Luis would go on and on about.

The Pimm’s Particle is both my first attempt at a superhero-themed cocktail and my own personal spin on the classic drink known as Pimm’s No. 1. There is no reason, though, to think this would be the last time Marvel inspires another happy hour.

Cheers, and have a magical day!