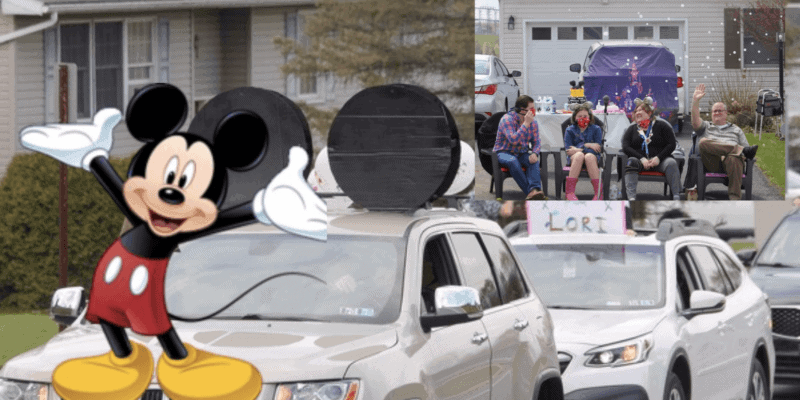 Pennsylvania resident and cancer fighter Lori Ebert-Tyworth had been planning a big Walt Disney World vacation for May with her husband, Mike, and her daughter, Katie.

In addition to the fact that the temporary Disney Parks closure is unlikely to be lifted by next month, Ebert-Tyworth’s health has gotten worse since she initially booked the Disney vacation, and her family had made the choice to cancel no matter what Walt Disney World Resort’s status is at the time of their scheduled stay.

When local residents in the State College, PA area heard about the Tyworth family’s cancelled vacation, they banded together to bring Disney magic to Lori. In what was the largest event in State Township in over a month, over 70 cars, all decked out in Disney style, drove by the Tyworth home over the weekend on April 25.

The local Disney parade for cancer victim Ebert-Tyworth truly pulled out all the stops!

The vehicles had various themes and many residents dressed in their Disney finest for the event. We especially love the “Just Keep Swimming” Finding Nemo themed hatchback in the DIY Disney parade.

The local Disney parade was a complete surprise for the family, who also enjoyed a Disney cake with a Mickey ears topper, a Belle layer, and a Toy Story layer. The magical confection was crafted by local pastry chef, Heather Luse.

Ebert-Tyworth, who was diagnosed last year, is battling a rare form of brain cancer called glioblastoma. After the surprise Disney themed parade, Ebert-Tyworth said, “It’s such a wonderful outpouring from so many good friends and family. I’m so glad to spend this time with all of you. Things are getting a little bit harder, but we’re going to keep fighting and having a great time together.”

Disney has played a big role in the Tyworth family’s household for as long as son, Andrew, and his sister, Katie, can remember. Andrew, a physical therapist who was going to have to miss his family’s Disney World trip, shared, “Disney’s huge for my mom and dad. That’s where they went on their honeymoon.”

He continued, “They’ve always been huge Disney fans, huge Star Wars fans. They were going to go and kind of relive some of the magic, give her some of that magic before she can’t see it anymore because she’s losing her sight, because of where the tumor is.”

Ebert-Tyworth has been employed by Penn State University for more than two decades, and the University worked with her family and numerous local donors to make the local Disney parade happen for her. The event lasted about an hour, during which time Ebert-Tyworth and her family were made to feel like VIPs!

She and her daughter donned sparkly Minnie ears and the entire family received Mickey Mouse masks to wear over their mouths and noses.

Kris Meyer, Ebert-Tyworth’s friend and co-worker who helped Andrew Tyworth put together the Pennsylvania Disney event, said “She’s brilliant. She’s just one of those perfectly brilliant, kind people. She takes such pride in Penn State. Her work ethic is amazing. She loves that university so much and I think that [was] the best way to start the parade.”

Watch the parade video below:

The team at Inside the Magic wishes nothing but the best for Lori Ebert-Tyworth, Mike, Andrew, and Katie. Leave some pixie dust of your own for the family in the comments!