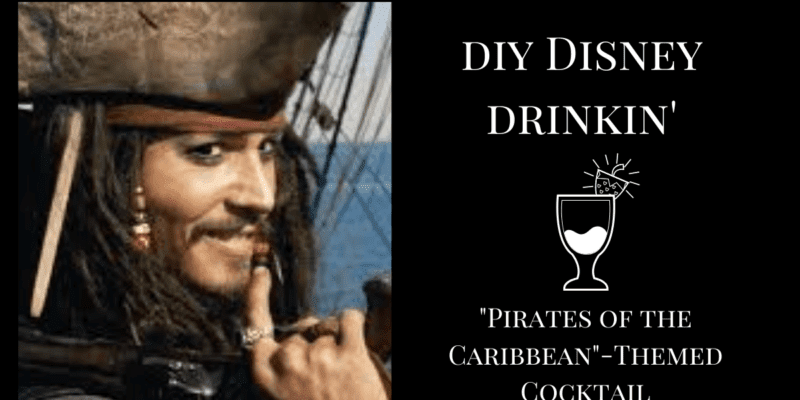 Ahoy ye bilge rats! It be time to make a cocktail inspired by Disney’s Pirates of the Caribbean franchise and find yourself a drink to last ye all summer long!

It’s called “Captain Jack Sparrow’s Golden Grog” and it features the dreaded monster of the abyss: The Kraken!

But before we get started, let’s talk about grog and how to make it.

Grog: Drink from the Caribbean

Grog is one of the oldest rum drinks of the Caribbean and has a rich history of sailing tradition. It was created by a British Admiral in the 1700s named Edward Vernon whose nickname was “Old Grog.” It was this admiral that started the tradition of giving sailors a daily ration of rum. Yes, until the late 1970s, British sailors were given a pint’s worth of rum a day.

But Rum in Admiral Vernon’s day was much stronger than it is today. So he issued Captain’s Order Number 349 which stated that every sailor’s rum should be diluted with a mixture of water, brown sugar (or other spices) and lime. The disgruntled sailors named the drink in his dishonor.

Grog technically did not become common until after the golden age of Caribbean pirates, but history also tells us pirates didn’t have the canon fire we see on The Black Pearl. So we’re going with it.

Traditional grog is the base of my piratey drink. But, I add two ingredients to it: Goldschläger (Cinnamon Schnapps) and The Kraken (over-proofed dark rum).

What you are left with is a twist on the iconic sailing drink that tells the story of a vessel that has succumbed to The Kraken, its sunken golden treasure now glistening in the fathoms below.

Unlike my other recipes, Goldschläger and The Kraken are essential components to this drink for obvious reasons. I provide a range of how much Goldschläger simply because you can make this drink as cinnamon-y as you want. For the main dark rum used in the grog, I leave that to your discretion. I preferred to use Mount Gay, but any dark rum will do. Spiced Rum like Captain Morgan also technically counts as dark rum. If you want to be extremely accurate with your grog, you want Pusser’s Navy Rum.

I would also like to mention that this is a drink of my own creation with ingredients of my own choosing.

Cheers, and have a magical day!