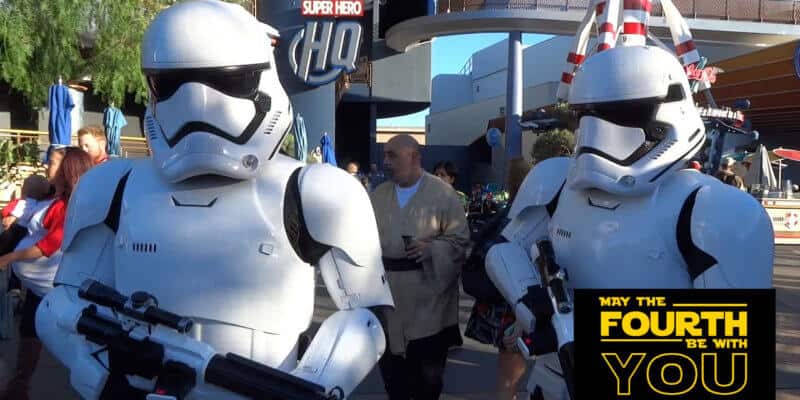 Disney+ came under fire on Twitter Monday, April 28, after the company has been called out for trying to claim media ownership of the hashtag #MayThe4th. The issues came about after the company put out a tweet to fans encouraging them to share their favorite Star Wars memories Monday, which they followed with a legal warning.

In their first tweet, the company writes: “Celebrate the Saga! Reply with your favorite #StarWars memory and you may see it somewhere special on #MayThe4th.” The company then replied to this tweet with the legal message: “By sharing your message with us during #MayThe4th, you agree to our use of the message and your account name in all media and our terms of use.”

By sharing your message with us using #MayThe4th, you agree to our use of the message and your account name in all media and our terms of use here: https://t.co/G0AyToufQ5

The legal message was met with over 6.5 thousand comments, most of which including confusion over the company’s claims to the hashtag.

Hey @Twitter , @jack at what point do you step in and specifically say that hash tags don't belong to anyone?

You know that's not how this works right. You can't just scream a terms of service agreement into the void and then assume anyone who does something falling in line has seen it and agreed. No one who tweets #Maythe4th has agreed legally to your tos.

Other commenters responded to the message with comedic replies making fun of the company’s pursuit of trying to claim ownership of the media tweeted using the hashtag.

By reading my tweet, Disney agrees to pay me $1 Million US, by no later than May 4th, 2020.#TwoCanPlayThatGame

I was born on May 4th – does that mean you technically own my birthday? #MayThe4th

By sharing anything with me on Twitter, Disney agrees that they owe me (I'll be modest) ten million US dollars.

Disney later followed the tweet with another stating: “The above legal language applies ONLY to replies to this tweet using #MayThe4th and mentioning @DisneyPlus. These replies may appear in something special on May the 4th!”

However, Aaron Wood, an IP lawyer at Keystone Law, told BBC that due to the popularity of the hashtag, it was unlikely Disney’s tweet would have been seen by everyone who used it.

“It is a little risky and presumptuous that all tweets copying them in with the hashtag will have read their terms, or know about them,” Wood told the BBC. Wood continued: “A user can give permission to someone else to use their tweet. However, Disney’s risk is whether users who simply use the hashtag are really are giving them that permission.”

The tweet from Disney+ asking fans to share their Star Wars memory came following the news the company would be releasing Star Wars: The Rise of Skywalker on the platform on Star Wars Day (May the 4th), two months earlier than it was originally scheduled to premiere on the streaming service. Upon the movie’s premiere on Disney+, Lucasfilm will have the entire Skywalker saga on the digital streaming platform.

What are your thoughts on Disney using the legal terms in an attempt to claim ownership of Twitter user’s content? Let us know in the comments!

Comments Off on Disney Receives Backlash Over #MayThe4th Tweet