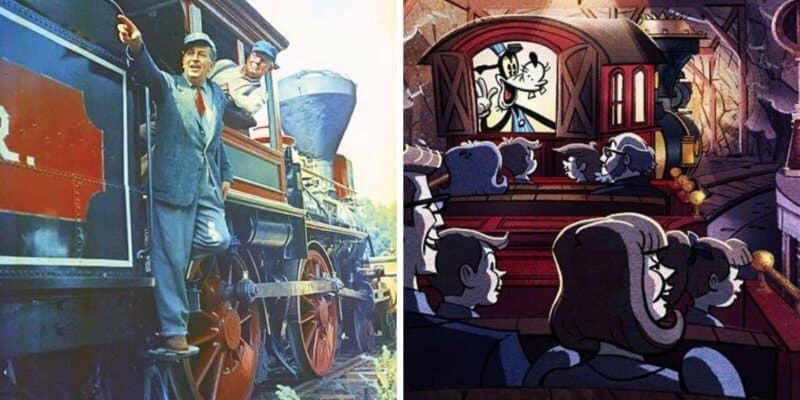 With today’s grand debut of Mickey and Minnie’s Runaway Railway in Disney’s Hollywood Studios park, guests have the opportunity to experience the first ride solely dedicated to the beloved classic characters Mickey and Minnie Mouse. This moment is likely bittersweet for some.

The Chinese Theater, which formerly housed The Great Movie Ride, has undergone a massive internal transformation in preparation for the new attraction. However, this is an exciting day for the Disney community, in that we are able to see two of Walt’s great loves– his original cherished characters and his appreciation of the railroad system– merge into a bright and whimsical new attraction!

Walt’s love of the railway spans back to early on in his childhood, from various familial influences. His father, Elias Disney, took a job working on the railroad crew that was building the Union Pacific Line and his uncle was a train engineer– both men affecting his early interest. Walt himself spent a period of time in his teenage years selling newspapers on a train line and thus developed a personal relationship with the railroad.

In a 1948 Essay titled What Mickey Means to Me, Walt describes how a long train ride from the northeast coast to Hollywood, changed the fate of both his and his brother Roy Disney’s career’s forever. At a crossroads, due to recent artistic theft from their animated collection, he spent this pivotal train trip brainstorming new ideas to keep his career afloat. Walt Disney would later go on to be considered a visionary, for a simple new character idea that led to the building of an empire — a spunky, relatable mouse, who would later go on to be named Mickey Mouse.

Later in life, when Walt began creating the initial concepts for the Disneyland park in Anaheim California, he remained loyal to his love of the railway. One of Walt’s personal favorite attractions at the park on opening day was the Disneyland railroad, mixing personal nostalgia and magic, and giving guests a chance to tour the whole of the park from riding around the perimeter. Trains have remained popular and nostalgic around multiple Disney parks as attractions (Big Thunder Mountain Railroad), transportation and merchandise items.

Throughout his life, Walt Disney has held trains in high esteem– from his personal connections to the railroad system early in life, to that pivotal moment creating the first sketch of Mickey Mouse on a train. These experiences have impacted his career in a positive way, as the artist and creator that we know and love today. With the opening of Mickey and Minnie’s Runaway Railway in the Chinese Theater, we as guests have the opportunity to see the blending of two things that Walt Disney himself cherished. So hurry to Hollywood Studios and experience this attraction for yourself! Let’s celebrate the positive influence of the railway on this incredibly exciting day in Disney history!

Do You Want To Visit Hollywood Studios On Your Next Disney Vacation?

If you want to visit the Disney Parks on your next family vacation, but aren’t sure where to begin planning, then don’t hesitate to reach out to our trust-worthy friends over at the Authorized Disney Vacation Planners at Academy Travel for a free quote, today!

They will be there with you every step of the way — From booking your Disney resort to booking your dining reservations to booking FastPass+ experiences so you can ride some of the most exciting rides and attractions (such as Mickey and Minnie’s Runaway Railway)! They will even offer you tips and tricks so you don’t miss out on any of the Disney magic (like meeting Mickey Mouse and Minnie Mouse themselves) while visiting the Disney resort.

Come visit Disney’s Hollywood Studios and experience for yourself, the magic of Mickey and Minnie’s Runaway Railway!