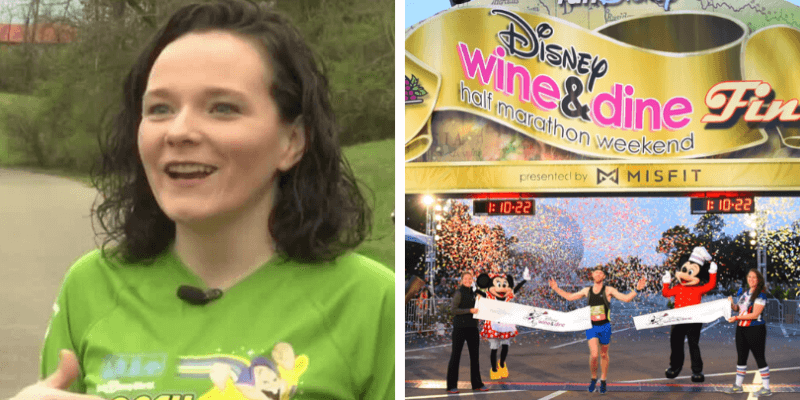 “So we were at Disney World…”

How does an athlete’s story start? It usually involves him or her sitting on the sidelines as they watch a friend, family member or idol participate in a sport and having that eureka moment where s/he declares  “What am I doing in the bleachers? I want to be out there doing the thing!” Well, for long-distance runner Natalie Fultz, that moment happened at Walt Disney World.

She found herself in the stands watching her best friend compete in the Disney Princess Race weekend when she felt the inspiration to start running herself.

“So we were at Disney World, I was there with some friends, and my friend from college, who is actually my roommate, was running the Disney Princess Half Marathon Challenge, the Glass Slipper Challenge,” she said in an interview with local news station Lex 10. “It’s a 10K on Saturday, and then you turn around and run a half marathon on Sunday. She actually ended up winning the 10K out of, like, 15,000 people that year.”

Her friend would also go on to finish top-10 in the half-marathon.

“Just the feel of being there, the atmosphere was like…I want to try this,” she said.

So, Fultz set her sights on what would be her first race: the ‘Wine & Dine Half Marathon’ at Disney World in November of 2015. She trained for seven months (Queue the Hercules montage). But when race day finally came, a thunderstorm came with it. A half marathon is 13.1 miles. But because of inclement weather, Fultz’s first race would be shortened to seven miles.

But it was a reminder that her goal was bigger than just to run a race at Disney World. Her goal was to run A race. Any race. And only a week after the Wine & Dine Half Marathon, she got the chance to run the Renfro Rock ‘N Run Half Marathon.

“I felt like everything had finally paid off and I could finally say that I had done it,” said Fultz. “Those [Wine & Dine and Renfro Rock ‘N Run] medals actually hang side by side because they were earned in tandem, it took both of them.”

That one little spark of inspiration that was ignited within her has grown into a fire that has fueled her racing career ever since. Over the past five years, Fultz has run multiple half marathons and full marathons.

“Running for me has always been, since I discovered it, a way to get away from my anxiety,” said Fultz. “It quiets my mind and gives me a sense of peace, and that’s definitely something we all need right now. Something to help not make everything feel so chaotic and find a way to calm down just a little bit.”

Fultz continues to go the distance thanks to inspiration from her friend and a little Disney Magic.

Find Your Own Disney Inspiration Running at Home

Many of us probably have an awesome memory from running a Disney race. The thrill of running through the parks before opening and the pride of walking around the parks wearing the medal. We can all be inspired by Disney to get up and run each day, and we can use that inspiration now more than ever. Even though we can’t run through the parks right now, we can still take part in the fun. Combining, technology, imagination, and a little Disney Magic, ! Themed after fan-favorite attractions, runDisney will host three virtual 5K events: the Mad Tea Party virtual 5K, the Space Mountain virtual 5K, and the Haunted Mansion virtual 5K. And yes, they do come with a finisher’s medals and certificates.

The first race begins in June, which means you still have plenty of time to sign up and start training. Seems like the perfect way for each of us to still be inspired to go the distance while continuing our social distancing. Click the link below to learn more about how to get involved with these virtual races.