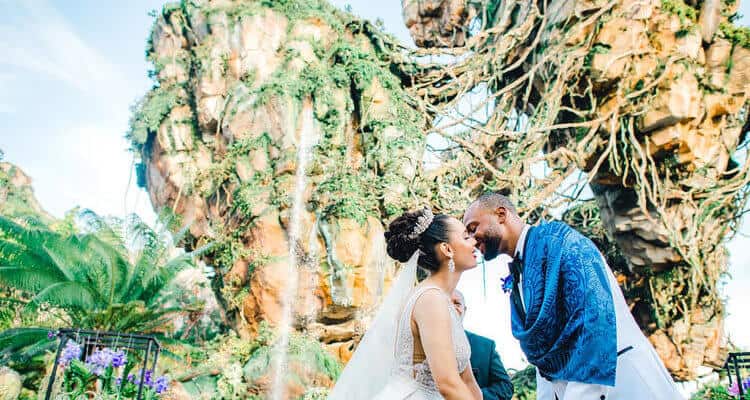 Patrice Hicks-Lemon, newlywed to Dontrell Lemon, has always dreamed of having her fairy tale wedding in the theme parks at Walt Disney World Resort (I mean, who doesn’t?) Meanwhile, Dontrell actually envisioned his wedding to be held at a courthouse.

“When I actually first met Patrice, one of the first things she talked about was having her wedding at Disney,” Dontrell said. “The energy at the Disney parks is always high. Everybody’s always in good spirits … no matter what, I knew somehow she had to have her wedding at Disney.”

But what’s even more magical than getting married in the parks at Disney World? How about being the first couple ever to share their love and be married inside Pandora — The World of Avatar at Disney’s Animal Kingdom? That’s exactly what happened for newlywed couple Patrice and Dontrell. “Pandora was definitely an area that we both mutually loved at Disney,” said Patrice.

The Hicks-Lemon fairy tale wedding was featured in the latest episode of Disney’s Fairy Tale Weddings, which made its debut today, March 6, 2020 on Disney+.

“We were just thankful enough to be one of the couples that had their wedding featured on the show,” Patrice said. “We really weren’t stressed about the whole process, and even though it was a fast pace with the show, we really couldn’t have done it without Disney with us trying to balance our fast pace lives, with working full time, going to school full time. They just made the process seamless.”

Patrice is currently working towards getting her PhD in population health science at the University of Utah. Dontrell is currently pursuing his law degree at Florida A&M University College of Law in Orlando.

Related: Have your dream Walt Disney World wedding in front of the Tree of Life in Disney’s Animal Kingdom

Patrice and Dontrell were accompanied by 60 guests as they enjoyed an entire weekend of wedding festivities!

“I grew up in a really tight-knit family and so being able to see everyone there in my favorite place in the world, it was just surreal,” Patrice said. “I couldn’t believe that it was all happening, and I got to marry my best friend and everybody got to be there with me.”

The ceremony took place on June 14 in Pandora, where they began having brunch at Tiffins Restaurant. The evening reception took place at the beautiful ballroom inside Disney’s Grand Floridian Resort and Spa.

“They really made you feel like you were the main attraction, so to speak, like all eyes were on you, this is your big day,” Dontrell stated.

After the couple had the wedding of their dreams, the family stuck around and they all celebrated the newlywed couple by having a big family vacation at Walt Disney World Resort. The family explored the Disney Parks together, created memories that will last a lifetime, and ended their weekend over at Boma — Flavors of Africa for a farewell brunch.

Disney holds a special place in the Hicks-Lemon couple’s hearts. “Disney was the first place that we actually had gone on vacation together,” Dontrell said. “It had become a place of celebration. Anytime we reach a milestone, that’s the place we’re going.”

Congratulations to the happy couple! Have you ever dreamt of having a Disney Wedding? Where would you like to have it held? Let us know in the comments.