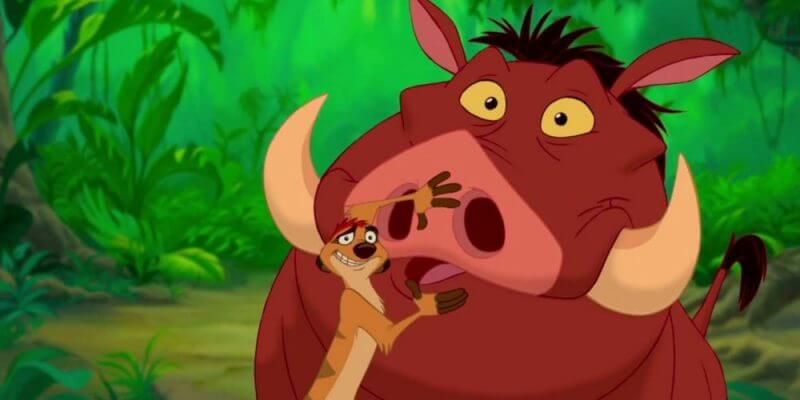 Do you frequent your local movie theater? You know that catching the latest flick can cost you a pretty penny if you do.

Last Thursday, the principal and the PTA group of Emerson Elementary School in Berkeley, California, were contacted via email by Movie Licensing U.S.A., the agency Disney and other film houses used to protect their copyright and licensing rights. The agency informed the school that they had “received an alert” about a PTA event–a fundraiser promoted by the Emerson Dads Club–at which Disney’s The Lion King was being screened.

Part of the email from copyright licensing manager Corey Goellner read, “If a movie is shown for any entertainment reason, even in the classroom, it is required by law that the school obtains a Public Performance license.”

The notice was reportedly unsettling to some of the parents of children at the school, including Lori Droste, Berkeley City Councilwoman, who has two children enrolled at Emerson.

Droste took to Twitter on Friday morning to vent her disapproval of the notice and the cost of screening the film. 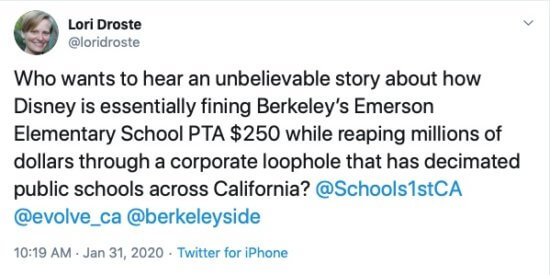 The tweet, which shames Disney for being so harsh with a public elementary school, continues to circulate the web: “Disney wants $250 when we are struggling to pay our teachers and spending per pupil is laughable?” the councilwoman tweeted.

She accuses Disney of “reaping millions of dollars through a corporate loophole.”

When reached via phone for comment, the copyright representative said the communication to the school had to do with a violation of copyright law.

Goellner explained that Music Licesning U.S.A. is a “sole source for licensing for major motion picture studios” and that “each studio has [its] own copyright department.”

She explained that the studios check with the agency to see that schools have the proper licensing for screening films. “We’re responsible for checking to ensure their movies are protected.” She further explained that the agency doesn’t seek out these infringements but that they are asked to work on the studios’ behalves in following up on those alerts.

She said that school librarians usually know about these rules, and they approach Movie Licensing U.S.A. to be issued a permit for a cost of $250 for a single-use license or $536 for an annual permit. According to Goellner, more than 25,000 schools have secured those licenses. She said that the licenses for schools apply to PTA organizations as well. She further stated that permits are only needed when films are screened for entertainment purposes.

“A screening in a classroom for educational purposes typically does not require a copyright license,” Goellner explained.

A spokeswoman for the school district said in an email that the section was “not aware they needed to obtain special permission to show the film” and that the principal is working with the PTA to resolve issues related to the film’s screening at the fundraiser.

Do you think Disney is going too far in demanding payment from a school for screening during a PTA fundraiser? Have they crossed the line, or did the school cross the line?