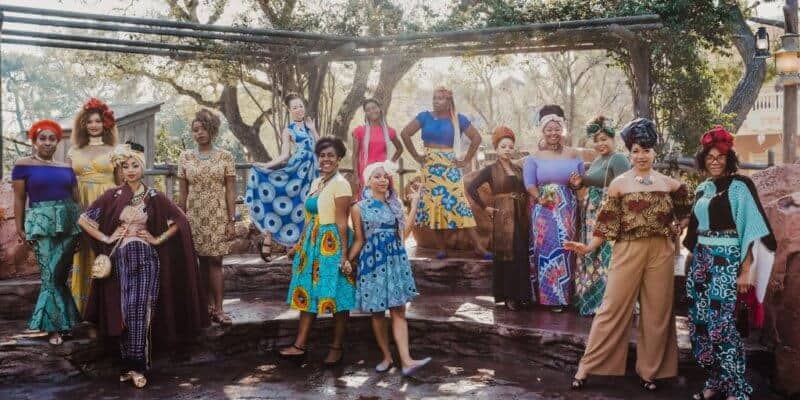 For many Disniacs, DisneyBounding is a very big deal. Blunt cosplay as Disney Characters is forbidden in every Disney Park for anybody aged 12 and older. So, the DisneyBounding was born as a way for fans to emulate their favorite Disney characters in more nuanced and creative ways. And it has inspired outfits from casual park-going outfits to Dapper Day swagger.

Learn More: What’s the difference between DisneyBound and Cosplay?

But DisneyBounding was taken to a whole new level when Audrey Lee Young and her crew arrived at Disneyland. Young and 13 of her friends–all black women–were each dressed in fabulous African prints and DisneyBound as one of the Disney Princesses. Because they used African prints, the group called themselves “The PRINT cesses.”

“It was important to see this through because when I came up with the idea, it was literally because our group had run out of black women Disney characters to portray,” Young explained. “After only TWO projects we had depleted the extent of black female Disney characters (the Muses and Princess Tiana). I said, ‘Well if there aren’t any more black Disney girls, let’s make the Disney girls black.'”

At the beginning of February, Young and her crew made their debut at Disneyland Park in Anaheim, California with photographer Madeline Barr. Their group’s reveal was scheduled around Black History Month in order to make a bigger impact. But their big Disney Day was years in the making.

“It was 3 years ago when my friend Audrey first had the idea to disneybound as the Disney princesses using African inspired prints,” Erike Kurzawa wrote in her own write up of the event. “The idea came on the heels of three other days full of black girl magic at Disneyland which were becoming a tradition among my friends.”

Kurzawa explained that it began with her, her “real-life sisters,” Young, and their friend Tiffany. Their first DisneyBond photoshoot involved the Muses from Hercules.

As disneybounders, we use our own clothes to style looks inspired by Disney characters. For this shoot, Tiffany brought us together to disneybound as The Muses from the Disney film, Hercules. The Muses were the first black characters prominently featured in an animated Disney movie, so it was important to Tiffany that all 5 muses in our group be portrayed by black women.

It was also revealed that it was tough to find enough black women to participate at the beginning because at the time, “there was no community.” These women became trailblazers in a new DisneyBound frontier.

There were a few other DisneyBound projects after that. They took on different styles of Tiana from Princess and the Frog, and they DisneyBounded the Dora Milaje from Marvel’s Black Panther. But with no black characters left, they decided to just go ahead and DisneyBound the Disney Princesses anyway.

The Photoshoot in Disneyland

The “PRINT cesses” was an assembly of 14 black women–the DisneyBound group now three times the size it was at the start–each woman dressed as a Disney princess. Many of their outfits were homemade. They took group photos and even got special meet ‘n greets with Mickey, Donald, Chip and Dale.

“At one point we finally had to leave Main Street because there were a lot of people staring and pointing as photos were being taken,” Young explained. “All day guests were commenting on how beautiful and majestic we looked.”

Young and all her friends strive to be an example for all the other little girls watching from the sidelines and hoping to be just like them:

For all the little girls out there who still don’t see the representation they deserve or who are still told that their black/brown skin and kinky hair are undesirable, you are beautiful princesses. The standard of beauty is YOU! You can be a mermaid, you can be a boss lady, you can be a warrior, you can be an adventurer. Dream big and dream bold.

Warning: Long caption ahead. . . Four years ago I was asked to be in a #groupdisneybound. It was all black girls and @followtheyellowbrickgirl had always wanted to do the Muses from Hercules. That was when #blackgirldisneymagic began. A year later we got together again and all bounded as different versions of Tiana (since she has so many outfits). Later that same week I came up with our next idea. Since we were out of black Disney girls I said “why don’t we make the Disney girls black?” I wanted to #disneybound as Disney princesses but in African Print. Well, 2018 went by, in 2019 we ended up doing a Dora Milaje group bound and FINALLY, in 2020 during black history month, my vision became a reality. On February 8th, I was able to assemble 14 black women together to make this dream come true. I couldn’t have asked for a more beautiful, strong and talented group of ladies. Everyone looked absolutely amazing. Walking around Disneyland dressed like queens was amazing. We were graced by the photography talents of @madelinebarrphoto who made us look even more beautiful, if that’s possible, and was the perfect woman for the job. Please go and click on all of these ladies feeds to see their close-up majesty. . . Ariel – @audreyleeyoung Snow White – @erikaenchanted Elsa – @followtheyellowbrickgirl Anna- @3babykoi Aurora – @geekygarbs Rapunzel- @tiffiestarchild Merida- @miniaturemissy Belle- @dressesandcapes Vanellope- @domdivadoesit Tiana- @dominiquebrown Moana- @crossfit_disney_princess Cinderella- @dapperjess Pocahontas- @chrshpls Jasmine- @missgolden_lady

Related: Find inspiration for your next DisneyBound in the Disney Parks

What do you think about DisneyBounding? Have you ever done it? What was the best DisneyBound outfit you’ve ever seen in the Disney parks? Let us know in the comments!