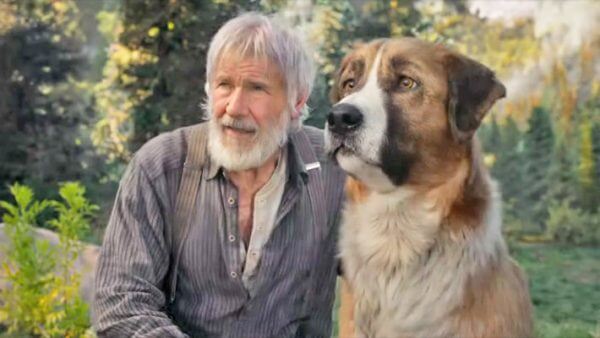 Now that Disney has acquired Fox, Disney fans get to look forward to even more films and shows being released by The Walt Disney Company. One of those is the 20th Century Studios film The Call of the Wild, based on the book of the same name. This movie follows the story of the adorable and adventurous dog named Buck as he finds his true calling in life after a long and winding journey. And when we saw the film, we can definitely tell that Buck’s story is one that all of us can relate to: sometimes you have to go through a lot of hardships to find where you truly belong.

At the press day for Call of the Wild, the stars of the film Harrison Ford and Cara Gee, as well as director Chris Sanders, shared why they believe that Call of the Wild is important, not just for current audiences but for future generations as well.

Harrison Ford (the man we all know and love from iconic roles in Star Wars and Indiana Jones) stars as John Thornton, an experienced mountain man who befriends Buck. The human and man’s best friend on the adventure of a lifetime, and just as Buck finds himself, Thornton does too.

“One of the things that I think that we get from film that’s really important is the experience of being present in the context of a story and not knowing how you’re going to feel about it,” said Ford when speaking about his character and the film as a whole. “But then having an opportunity to get some emotional exercise out of it, to feel our common humanity. And that’s why I really encourage people to see this kind of movie in a theater, with strangers, in the dark, oh my goodness! Can you do that? You can, you can. And it has such scope and scale, even though a lot of that is generated by computer graphics. It’s done so beautifully, so sensitively, that I think it’s really a remarkable achievement.”

Ford is right — the film, even with its heavy use of CGI, truly shows the remarkable and unique beauty of the natural world. It’s a display and nod to just how massive the world around us is, something that indigenous Canadian actress Cara Gee says will hopefully impact viewers of all ages.

“Protecting the environment for that next generation is something that I think the film speaks to in an indirect way. We just get to experience the majesty of it, and hopefully, that inspires some deeper respect. So that’s on my mind definitely. But I think it will live on and on,” shared Gee, who plays Françoise in the film, alongside Omar Sy as Perrault.

Gee continued to share that even though Call of the Wild definitely shares the beauty and importance of preserving nature, it does so in a more subtle and indirect way. The film is about a dog’s journey (and, likewise, the human’s journey) to finding himself, his true calling, and where he belongs in the world. But the film also artistically displays the massive and beautiful qualities of nature and hopefully inspires audiences in that way, as well.

She said, “I think what’s beautiful about this film is that it speaks to [preserving nature] sort of indirectly. And before any of that can happen, I think it comes from a respect of nature. I think that’s the first seed of it. And I think in our culture it’s so easy to be disconnected, and I include myself in that…But certainly, a respect for where things come from…to be mindful of that is I think a first step. And if this film can inspire some reverence for nature, I think that’s a beautiful thing.”

The film’s director Chris Sanders also spoke about the impact he hopes Call of the Wild will have on audiences of all ages, no matter their current stage in life. He shared that everybody grows up and starts their own journey, and while there is no telling where you are going to go, you can still enjoy the ride. Buck, for example, is thrown into various situations throughout the story that cause him to adapt, learn, and grow, just as all of us have to in our own lives.

Sanders also shared, overall, what he thinks the film will do for audiences. The themes of the film are truly ones that both kids and adults can relate to and should discuss.

“I think it gives people something that they can really hold onto, be inspired by, and to also talk about. I think that things, I mean of course in my own life there have been things that are surprises and things that are unexpected and you have to navigate them. You’re compelled to. And I think finding ways to pick yourself back up after you’ve fallen down is something that nobody really talks to you much about,” Sanders shared. “Even when you’re a kid, you see a lot of stories of people who believe in themselves and find something that they want or accomplish something. And I think one of the things you don’t realize is that believing in yourself means picking yourself back up after things go terribly wrong. And that’s the thing that I think is in this story that’s great.”

And after seeing the film for ourselves, we agree with Sanders’s sentiments. The film, at its core, is a commentary on life and the experiences we all have. Often, we find ourselves in situations that we don’t necessarily want to be in. But in those times we learn and grow, and if that’s something that Call of the Wild can share with its audiences, then 20th Century Studios has done a great job.

The Call of the Wild hits theaters on February 21.