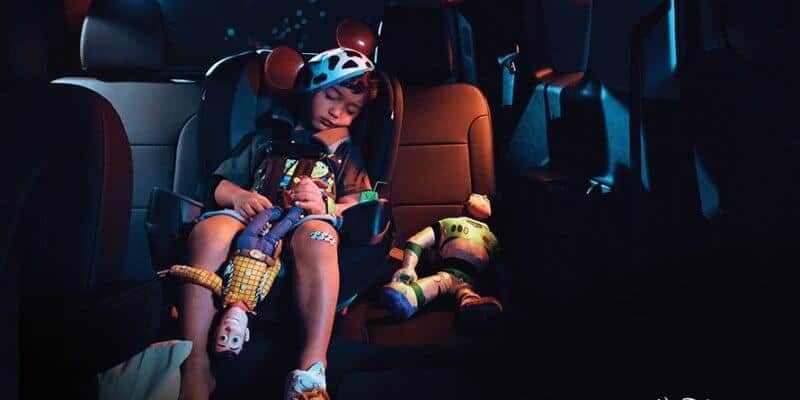 Disney’s in-house advertising agency, Yellow Shoes, never ceases to tug at our heartstrings. But this time, they were able to do it without even showing a Disney park.

Photographed by Caitie McCabe under the creative leadership of VP Jean Batthany and Creative Director Jim Real, Disney’s latest campaign features sleeping kids in the afterglow of what was clearly a magical Disney day.

We look into the back seat of a car. The streetlights shine out from the night sky and through the rear window. We see one boy asleep in his booster seat, surrounded by his new Toy Story friends. Another sleeping boy left his lightsaber on, glowing like a nightlight, while a porg wearing an x-wing fighter helmet stands by. And a little girl named Alexa, according to her “I’m Celebrating” button, snoozes away in her Elsa dress. An Olaf plush doll is in her lap, Anna sticks out from her sequin backpack, and a Mickey balloon hovers nearby.

Here are the three of them:

You don’t need to see a castle or a spaceship or a mouse to know where they’re driving from. Through these simple afterglow pictures, you know where they were. And most of us who have been to a Disney park know this feeling.

Whether you were in the proverbial car seat, or you’ve looked back and seen a view like this for yourself. It sparks up that nostalgia as well as the desire to have this moment again, which would also mean having another magical Disney day beforehand.

This is only the latest powerful campaign to come from Yellow Shoes. Just a few months ago, they released their commercial “Only Little for a Little While,” which made everyone cry within less than 30 seconds. Click here to watch that commercial.

Book your Disney trip with the Authorized Disney Vacation Planners at Academy Travel to give your kids the most magical vacation on Earth.

When was the last time you experienced a moment like this after a Disney day? Are you as struck by these advertisements as we are? Let us know in the comments!