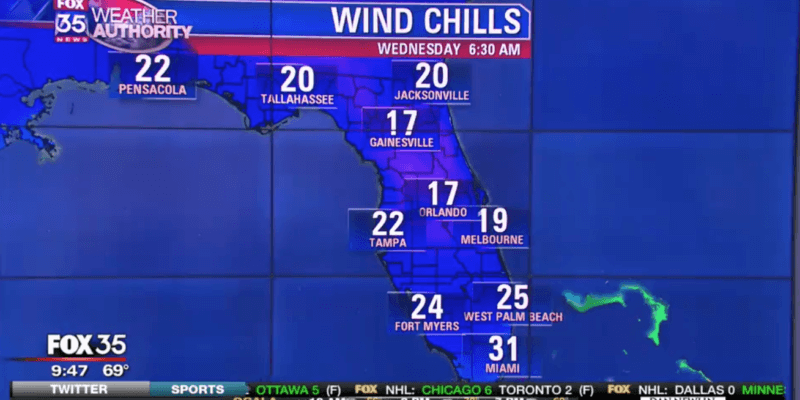 When traveling to Florida during the winter months, people tend to get away from the cold weather and into some of the warmer temperatures, but it looks like Disney World isn’t going to be warming up any time soon.

In fact, if you are traveling to Walt Disney World this week, you may want to pack some of your warmer clothing.

Central Florida will experience some of the coldest days yet as arctic air is moving into the area.

Sunday, January 19, was expected to be the “last day of warm weather until maybe the end of next week,” FOX 35 meteorologist, Brooks Tomlin, stated.

Moving forward, the rest of this week and possibly into the next, temperatures will drop significantly. Arctic air is entering the region and on Monday, January 20, Central Florida will wake up to temperatures in the 30s and 40s.

But that’s not even the worst of it because Tuesday morning is expected to be even colder, still with temperatures in the 30s and 40s.

Wednesday, January 21 will be the coldest, with temperatures in the 20s and 30s, which means it will be near or below freezing for much of Central Florida.

“We’re going to have gusty northwest winds and right now, some of the wind chills on Wednesday morning are dangerously low,” Tomlin said. One model is showing possibilities of wind chills in the teens and twenties on Wednesday. “This is just one model’s forecast. I’m not going that cold just yet. We’re going to monitor and track the cold air through the coming days.”

The risk of a freeze, hard freeze and dangerous wind chills exists next week. Images are one computer forecast model's output….. other guidance is warmer for now…. We'll keep you posted. #FOX35 #Orlando pic.twitter.com/RkrEC8lwLv

So if you are planning on traveling to Walt Disney World, or other Central Florida locations this Monday through Wednesday, be prepared and pack sweatshirts and jackets because it is expected to be three of the coldest days Central Florida has seen in a while.

Are you planning on visiting Central Florida this week? Let us know in the comments.