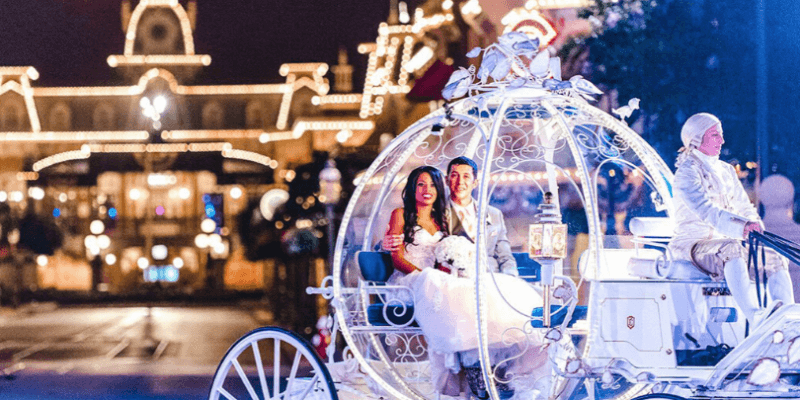 Season 2 of Disney’s Fairy Tale Weddings is coming to Disney+. The reality TV show will begin streaming on Valentine’s Day.

Hosted by Stephen “tWitch” Boss and Allison Holker, the show will feature many magical weddings at the Disneyland Resort in California and Walt Disney World in Orlando, Florida. For example, one will be held on Pixar Pier in Disney California Adventure, and include an awesome lights show and a surprise celebrity musical guest.

“You have all these other dreams that have not been realized yet. And they’re just as big and just as extravagant and just as special. Disney was built on dreams anyway, so their fans have that same kind of DNA in them.”

The season also promises to go beyond just the realms of Disney parks, featuring an underwater proposal, a musical flash mob, and even a trip to a glacier. “There’s so much that Disney has to offer, so we really explored more of the world this year,” says Holker. “We got to be on top of a glacier this season,” tWitch added. “I don’t know how many people have literally stood on a glacier. That’s this season. That’s just one thing!”

But one experience the co-hosts enjoyed most was experiencing the Disney parks after they closed to the public. “When it’s quiet in here, you get to really appreciate what’s going on,” said tWitch. “You can kind of feel Walt walking around with you.”

Are you a fan of Disney’s Fairy Tale Weddings? Are you excited to see the show premiere on Disney+ this season? Does this news interfere with your Valentine’s Day plans? Let us know in the comments!

Comments Off on “Disney’s Fairy Tale Weddings” Season 2 is Coming to Disney+, Gets Premiere Date