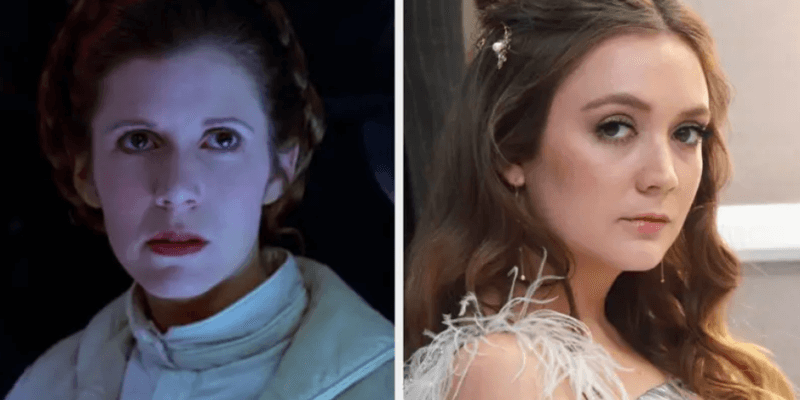 Spoiler Warning: This article touches on plot points from Episode XI. If you have yet to see the film, read with caution.

If you thought Star Wars: The Rise of Skywalker couldn’t get any more heartfelt than it already was, think again. It was just confirmed that Carrie Fisher’s daughter, Billie Lourd, portrayed Princess Leia in Episode XI’s flashback scene — and already we’re crying all over again.

We were mesmerized by every scene depicting Carrie Fisher in The Rise of Skywalker. Ever since we found out that she would be included in the film in any way possible, we knew we’d be crying in our theater seats every time she appeared on screen. And now that we found out that Fisher’s own daughter was able to portray her mother’s character in one scene, we’re about to rush to our local theater to see the movie yet another time.

If you don’t know, Billie Lourd has been starring in the recent Star War films as, of course, a member of the Resistance. Lourd appeared several times as Lieutenant Kaydel Ko Connix, and she naturally had numerous scenes with General Leia Organa. Ever since we first saw Lourd’s character in The Force Awakens, we knew her being in the film was even more special than we could have imagined since the  Star Wars franchise truly shaped her mother’s career.

But there is one scene in  The Rise of Skywalker in which Lourd doesn’t play Connix. In this flashback scene, she plays her mother’s character, Princess Leia, during one of Luke Skywalker’s flashbacks. Thanks to the power of movie magic and modern technology, we see Leia’s face in this scene, but it’s actually Lourd’s body in the film.

In an interview with Yahoo Entertainment, ILM Visual Effects Supervisor Patrick Tubach shared that during this flashback scene, the team was able to use de-aging technology to allow Mark Hamill to portray young Luke Skywalker. But when it came to Leia, they needed an actress to perform the role so that they could digitally replace the face with Leia’s. That’s where Lourd came in.

“Billie was playing her mother,” Tubach revealed. “It was a poignant thing, and something that nobody took lightly — that she was willing to stand in for her mom…It was an emotional thing for everybody to see her in that position. It felt great for us, too. If you’re going to have someone play [Fisher’s] part, it’s great that it’s [Billie] because there are a lot of similarities between them that we were able to draw from. The real challenge was just making the Leia footage we had to work with fit in that scene.”

Related: Carrie Fisher’s brother says Leia was supposed to be the “last Jedi” in “Rise of Skywalker”

We don’t know about you, but if this isn’t a fitting tribute to Fisher and her legacy, we don’t know what is.