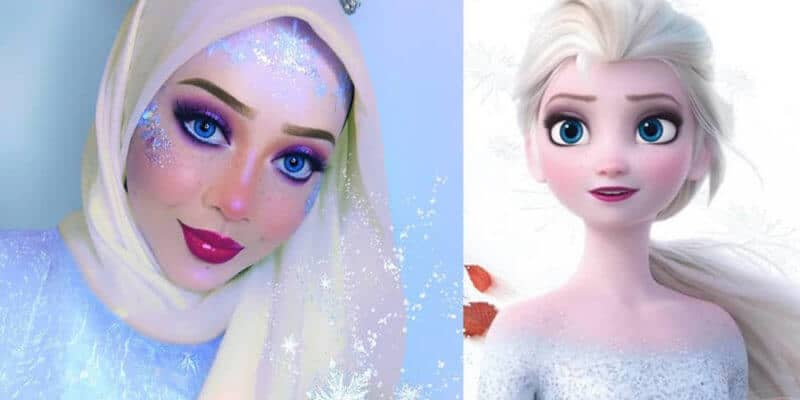 A Malaysian Muslim makeup artist uses her hijab to help her transform into Disney characters, and the results are gorgeous.

Saraswati, known as @QueenofLuna on Instagram, has been creating pop culture-inspired makeup looks for years. We’ve even shared some of her makeup looks in the past — but it’s been over three years since then, and just as her Instagram following has grown, so have her capabilities.

Now, Saraswati boasts over 400,000 followers on the social media platform, and her makeup creations keep getting more and more magical. She has recreated looks inspired by characters from popular Japanese animes, vintage cartoons, comic books, Cartoon Network shows, Tim Burton films, and so much more, but by far our favorite photos she has shared on Instagram are her Disney-inspired makeup looks.

Perhaps the most clever and innovative thing about Saraswati’s makeup looks is her use of her hijab. She uses a hijab with a different color in nearly every photo, and each hijab correlates to the hair or headpiece of the character she is trying to emulate in the photo. Her makeup skills are fantastic and combined with the empowering use of her hijab, Saraswati is truly inspiring.

“I have never claimed to represent all the hijabis … I am just staying true to myself and doing what I’m passionate about,” Saraswati said in an interview with MTV. “At least it makes me happy. And I am really glad I could inspire some women, little girls, and teenage girls out there — especially those who are afraid to wear [a] hijab in public. And [I’m] glad I could change some people’s opinions about [the] hijab, who think that we are oppressed.”

Ariel and Vanessa from The Little Mermaid

Scar from The Lion King

Roxane from A Goofy Movie

The Queen from Snow White and the Seven Dwarfs

Which of Sawaswati’s Disney-inspired makeup looks is your favorite? Let us know in the comments!