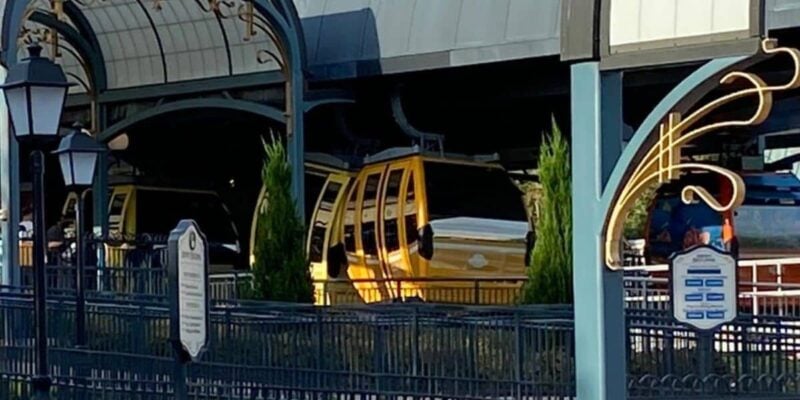 Disney World is known as “The Most Magical Place On Earth,” but that doesn’t mean that every single situation that unfolds at Magic Kingdom, EPCOT, Disney’s Animal Kingdom, or Disney’s Hollywood Studios is exactly “magical.”

Recently, a report from the Orange County Sheriff’s Department noted an incident that occurred with an EPCOT Guest at the Disney Skyliner.

Chase Holderby, 30, of Merritt Island, Florida, was being very loud and stumbling around the American Adventure Pavilion after witnesses said he quickly chugged down two beers in approximately 30 seconds.

“We observed the subject shaking everyone’s hand in line, high-fiving people, and was stumbling while in the line,” a deputy wrote in an arrest report.

A few minutes later, the Disney Park Guest was seen having a verbal argument near the Japan Pavilion. When he made it to the Morrocco Pavilion, Walt Disney World Resort security asked him to leave the theme park.

That’s when Holderby, continuing to be belligerent, took his shirt off and got in line for the Disney Skyliner.

“Once in the line queue, he continued to act belligerent and cause the crowd of people in line to become alarmed,” the deputy wrote. “While attempting to get him onto the physical gondola car, he wouldn’t initially get in and was dangerously close to falling into the area beneath where the attraction operates.”

As a result, Disney had to stop the entire transportation system and “delay all other riders.” After multiple warnings, Holderby was arrested on charges of trespassing and disorderly intoxication.

More on the Disney Skyliner at Walt Disney World Resort

Glide across the sky and add an extra dash of pixie dust to your day. This grand, state-of-the-art gondola system conveniently connects Disney’s Hollywood Studios and International Gateway at EPCOT to the following Disney Resort hotels:

Please Note: Guests travelling on the Disney Skyliner will not be able to access the EPCOT parking lot after EPCOT has closed for the day. If you are attempting to return to your parked car, please use alternate transportation such as a Disney bus.

What do you think of this incident at Disney World? Let us know in the comments.