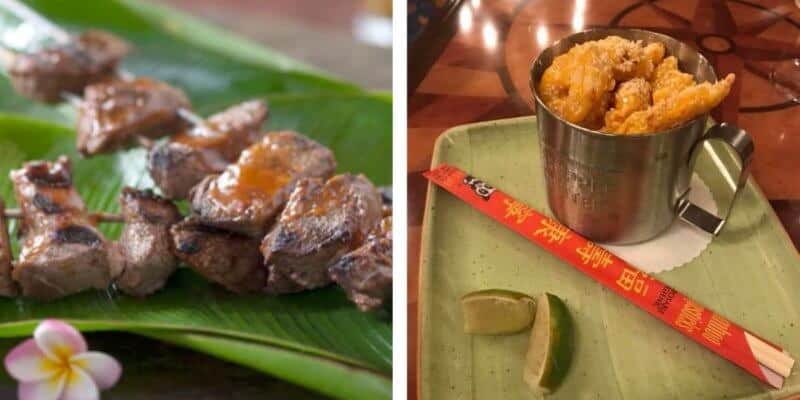 Both Disneyland and Walt Disney World are filled with unique and delicious food items. From late-night snacks to sweet treats, the Disney Parks have a wide variety of items to choose from, but did you know there are several “secret” food items that Disney offers?

That’s right — There are quite a few secret Disney food items that aren’t on the menu! And even better, we have a foodie guide for you to follow on your next Disney vacation so you can try some of these “hidden gems”.

At the World Premiere Food Court, be sure to ask a cast member at the ROXY counter for a Viewmaster.

The Viewmaster will then show a wide variety of all the secret food menu items that are offered at Disney’s All-Star Movies, including this secret cheeseburger. The Cinnamon Bun Cheeseburger is a regular burger, but instead of a bun, it features a cinnamon roll! It also includes pieces of candied bacon, making the perfect sweet and salty combo.

Over at Disney Springs, be sure to stop by D-Luxe Burger for this next secret food item.

All you have to do is open up the My Disney Experience App and click on the D-Luxe Burger menu. There, if you scroll all the way down you will see an entire secret menu! From a Bacon and Blue Burger to a Grilled Cheese Sandwich, this secret menu is filled with hidden gems.

Skipper Canteen in the Magic Kingdom

There are quite a few secret menu items at Skipper Canteen. First, the Pao de Queijo item, which is similar to the Brazilian Cheese Bread at Epcot’s Food and Wine Festival, but this item is served with chimichurri cream cheese.

Also available is Bang Bang Shrimp. If you are looking to add a little kick to your dinner, you have to try this!

Ohana is famous for its meat skewers, teriyaki noodles, and delicious bread pudding, but it isn’t always easy getting a reservation for this restaurant. Well, what if we told you that you can enjoy some of Ohana’s famous items without dining at the restaurant?

After 4 pm, just ask the bartender for the secret Ohana menu and enjoy!

Disney guests know that Whitewater Snacks in Disney’s Grand Californian Hotel & Spa has a wide variety of delicious food, but if you are looking for something unique, then you’ll have to try this secret menu item.

The Carnitas Nachos are a shareable snack covered in carnitas, guacamole, and other delicious ingredients.

In Disneyland Park, head over to The River Belle Terrace and ask a cast member for the secret Loaded BBQ Tater Tots. This savory snack is covered in BBQ sauce, brisket, cheese sauce, and fresh green onion.

Vanilla, strawberry, and chocolate are classic shake flavors, but why choose one when you can choose all three? At Flo’s V8 Cafe in Cars Land, Disney guests can order the Neapolitan Shake off of the secret menu!

The Tropical Hideaway in Disneyland Park

Disney guests can choose any flavor of Dole Whip and have it sprinkled with sweet and salty candied bacon!

Which one of these Disney secret menu items do you want to try on your next Disney vacation? Let us know in the comments.