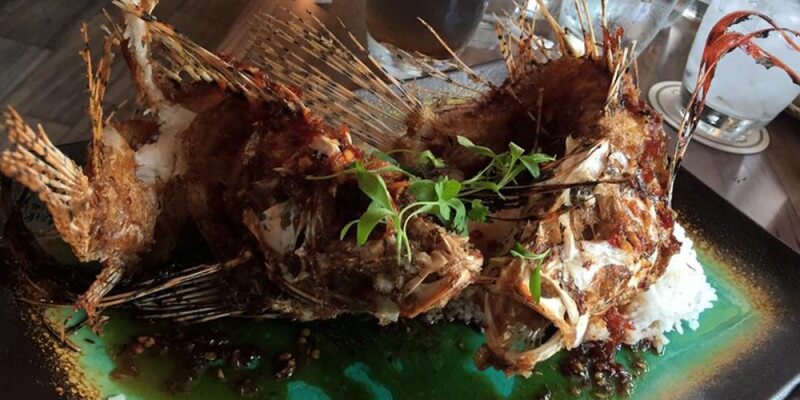 If there’s one thing you can absolutely say about Skipper Canteen at Walt Disney World’s Magic Kingdom, it’s that they are 100% bold. Bold in flavor, bold in identity, and now bold with their very significant changes to the menu. See, many people were worried that they would “dumb down” the menu because it was a little too ambitious for Walt Disney World’s most popular theme park. Lucky for us, and our palate, that is far from the case. If anything, the menu has grown more wild and ambitious than ever before! Have you ever eaten a whole lion fish? How about two? Well I did, and it was one of the most flavorful dishes I’ve had on Disney property. Digging in with your fingers and picking around the bones took a little bit of getting used to, but the flavor payoff was well worth it and I will definitely be back for seconds. Another menu item I had was the Shiriki Noodle Salad (an appetizer) that featured rice noodles, edamame beans, mushrooms, green mango, and cucumber tossed with a sweet chili sauce. Overall, it was incredibly delicious and the acidity was right on point. A bit of a heavy way to start your meal (the woman at the table next to me ordered it as her entree), but with flavor like that, it’s worth shoving it all into your face as you await your main course. I closed out my meal with the new dessert “Quick Sand!!!” A jasmine rice pudding with mango sauce, lemon curd, hibiscus merengue, and pineapple. The tartness of the mango sauce was a great contrast to the light fluffiness of the rice pudding. It was a tiny party on a plate and a wonderful way to end this A+ dining experience. Other new menu items include the Char Siu Pork becoming a braised pork belly, The gourmet mac & cheese that they had is now a beefy baked pasta. While it’s more baked ziti than mac & cheese now, it’s still the same dish…just in attractive cube form. A coriander-mint vinaigrette on the steak salad is another new addition, but otherwise, the items I had for lunch during my meal were the heavy hitters of note.

Without a doubt, the new additions to the menu at Magic Kingdom’s Skipper Canteen are worth writing home about. An unforgettable vacation requires an unforgettable meal — don’t miss out. For all the latest and greatest news from the Walt Disney World parks, stick with Inside the Magic!